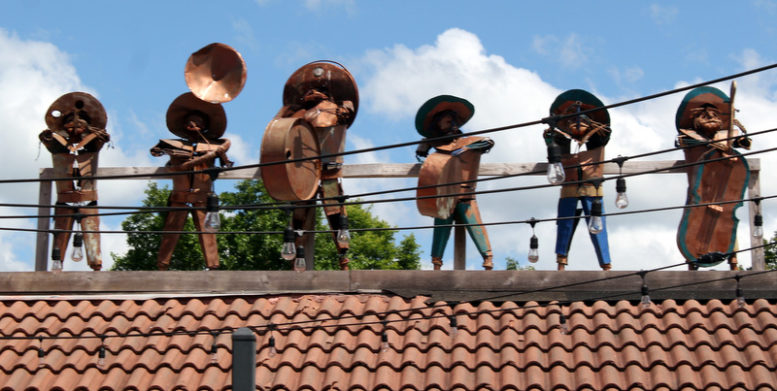 In a world where big chains employ clowns and kings to spice up the sameness, the rugged individuality of the Mexican culinary art form engages all five senses.

It’s rewarding to find a truly authentic Mexican restaurant, one that offers a total sensual experience. Ample artwork shouts from the walls, loud as Mariachi music. Even the presentation of food is fun. Sizzling fajitas announce that your olfactory will soon bathe in the aroma of roasted peppers.

My search began in college. Manny’s in Kansas City. Maria’s in Santa Fe. But the Holy Grail of Mexican food sits beside the Fort Worth stockyards, in a little white frame house. In the 1970s, diners entered Joe T. Garcia’s through the kitchen, passing Mama Garcia stirring a washtub-sized vat of refried beans. Joe T’s menu offered only one item: a multi-dish family style presentation that remains the standard by which all Mexican fiestas are measured. I’ve sampled Mexican food from San Antonio to San Jose, from Los Angeles to La Paz, even Manhattan (decent), Detroit (fabulous) and London (don’t bother).

Hundreds of Mexican restaurants dot the landscape like culinary cacti, none better than Flor de Mexico in Milan, Missouri.

In this remote town of less than 2,000 people, with its burgeoning Hispanic population, I found my Coronado. Downtown on the square across from the plain walls of the county courthouse sits Flor de Mexico, a one-stop Mexican grocery store and restaurant. This far north, it’s as authentic as a roadside restaurante on the Baja, right down to the pico de gallo on the table. The servers spoke halting English. I ordered in halting Spanish. My table faced a picture window framing the ugliest courthouse in America, a gray stone box built in 1938 during the WPA. The spirits of Chief Pontiac and Tatschaga and Black Dog joined my table. Pontiac pointed to a spot where a previous courthouse unearthed a Native American burial mound, using burial stones to build the first jail. My ghostly Native American companions nodded in silent approval of my meal: soft corn tortillas gently fried, overflowing with cactus and tripe, onions and cilantro, and salsa verde to whet the eyeballs. It’s much closer to their diet than burgers and fries.

–from Souls Along the Road