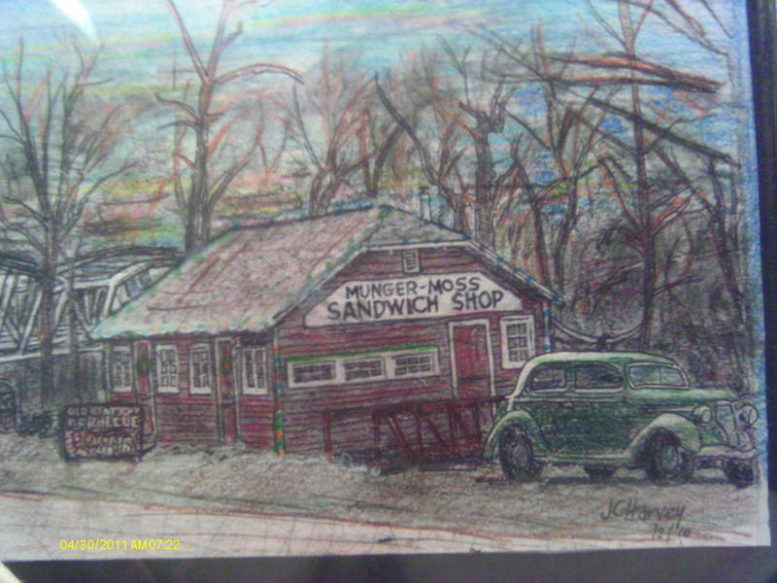 I found a hideaway. When I rolled to its door, a thundershower was beating down on the low slung structure made mostly of logs with mud chinks, its back wall standing just a couple of feet above the swollen Big Piney River. It was still before lunch, and the neon beer signs were switched off. A dog with pit bull jaws and a decidedly defensive attitude greeted my car door. I sat frozen for a moment, undecided about dipping my leg out of the car to troll for jaws. Lightning flashed, and the dog retreated into the woods across the road. He knew he couldn’t bite thunder. I dashed through sheets of rain to the front door.

The Elbow Inn—named for Devil’s Elbow, a big rock in a hairpin turn in the Big Piney River—has been cranking out good times since 1929. Today, it’s a waypoint for every motorcycle couple who enters the Ozarks, and a watering hole for many of the soldiers who set foot in Ft. Leonard Wood, a short cab ride up the hill on old Route 66. The barbecue brings customers from as far away as Sweden. Most women walk into the bar wearing their brassieres; some leave without them.

I walked in and let my eyes adjust to the dim light that managed to penetrate through rainspattered windowpanes. A voice greeted me from beside the thick shellac that preserves the rust and cream colored wood of a cedar-top bar. “Can I help you?”

“Kitchen’s closed, but the bar’s open.” Terry Robertson is the perfect typecast for this historic bar.  He’s a retired game warden who knows the area and its history, and he loves to visit with wayfarers. “Great place,” I offered, looking up at the low ceiling covered with a unique decor: dollar bills papered the ceiling, and hanging from it was a rainbow coalition of brassieres, liberated from the shoulders of a thousand women who got swept up in the moment in this living history museum.

This bar sits on the original Mother Road, now an appendage to the newer Route 66 that was carved through Hooker’s Cut in 1946, at the time the deepest road cut in the world. Now, even Hooker’s cut has been bypassed by Route 66’s granddaughter, I-44.

The door swung open and two middle-aged men walked in.

“Great!  A round for everybody,” one of the men said. Terry obliged, pulling an unholy alliance of Miller Lites and Busch cans from the cooler, abstaining himself, as all good bartenders do before noon. The two men were from Chicago, a fact verified by their Ditkaesque accents. Their goal was to drive an old Ford Econoline van along the Mother Road from pier (Navy) to shining pier (Santa Monica). They knew about this roadhouse, and within minutes we were swapping tales about the Elbow Inn’s connection to the windy city. Al Capone sent his henchmen down here to hide. A guy named Bud Medina showed up here after his role as triggerman at the St. Valentine’s Day massacre. Bud’s name doesn’t show up in any history I could find. But it probably was an alias. According to everybody at the bar, a whole rogue’s gallery of mobsters used to hide out here, in the middle of nowhere.

Lightning flashed, thunder crashed and the rain beat down harder on the old roof.

Time has been kind to the Elbow Inn; so has the Big Piney River, only occasionally threatening the old tavern with its floodwaters.

I thanked the bartender, offered best wishes to the Windy City wanderers, and walked out into the storm. The pit bull was still hiding from the lightning and thunder, and I jumped in the car to follow this ancient path that winds up the hill, across the interstate, from pier to shining pier.

0 Comments on “Devils and Elbows”