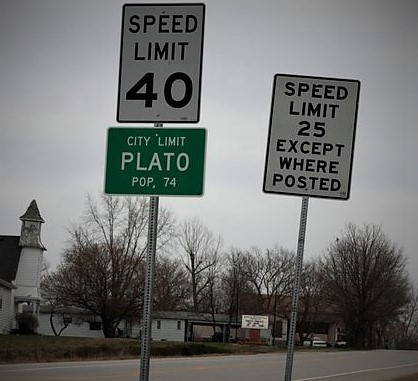 Only a few months remain for the little Missouri town with a big name to reign as America’s mean population center. The way a census official described it: if you balanced America’s total population on the head of a pin, in 2010 the pin would have been under Plato, MO.

The folks of Plato got a kick out of that. But life didn’t change much for the town’s residents, just as becoming the statistical center of the United States didn’t change Edgar Springs, Missouri in 2000, or Steelville in the ’90s (although Steelville has always promoted its tourism), and DeSoto, Missouri a decade before that.

Meanwhile, the new census will determine a new population center.  Where will it be?  Philosophers hope it’s Republic, Missouri. Conservationists favor Evergreen. Lovers love Hartville, Missouri. Floaters want Niangua. It’s all luck, based on the movements of 330 million Americans.  My best guess: Sleeper, Missouri. –from Souls Along The Road