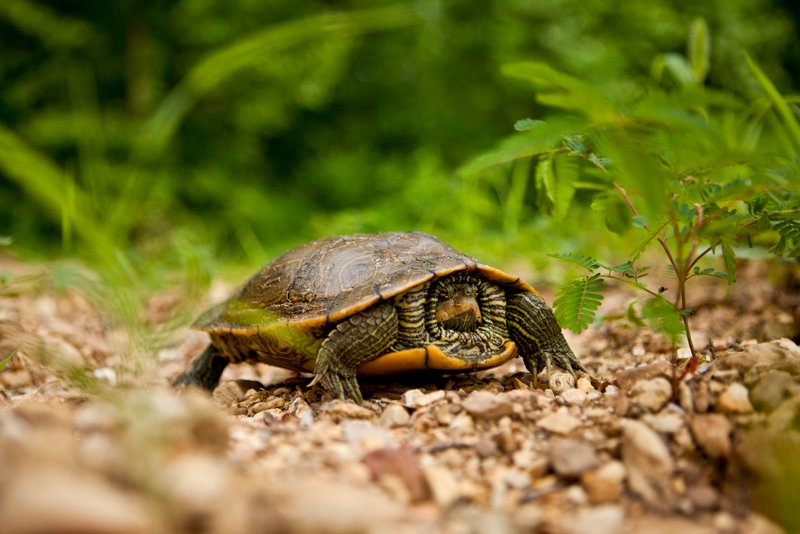 Morning rush hour murders your nerves. Worse for turtles. I saw one the other day, stranded on the center line of a busy expressway. He was upside down, legs fully extended, grasping at the sky. His chances for survival were slim as he wriggled in the morning sun, cars whizzing by. So I pulled over and stopped, waited for a hole in traffic and trotted out to pick him up. As I neared him, I saw the small pool of blood, and the gash in his right rear leg. It might be a fatal wound, but one thing for sure: I would not let him die on that center line.

Picking him up, I carried him to safety. Walking down into the woods a ways, I built him a nest of grass and leaves, and carefully placed him there, to regain his strength and wits, and perhaps survive his wounds. I left him, trotted up the hill to my car, and zoomed onward to work.

I thought about that turtle all day. He was big, as box turtles go…probably older than me. Maybe he would survive.

I drove home over the same road, and stopped at the spot I had rescued the turtle. I went to his nest, but he was gone. I walked back to the road again, thinking maybe he was okay, when I saw him a few yards away, his hard shell crushed. He had tried to make it across the road again.

My earlier act of kindness had delivered him to the wrong side of the road. In my effort to help, I only set him back in his effort to find love.