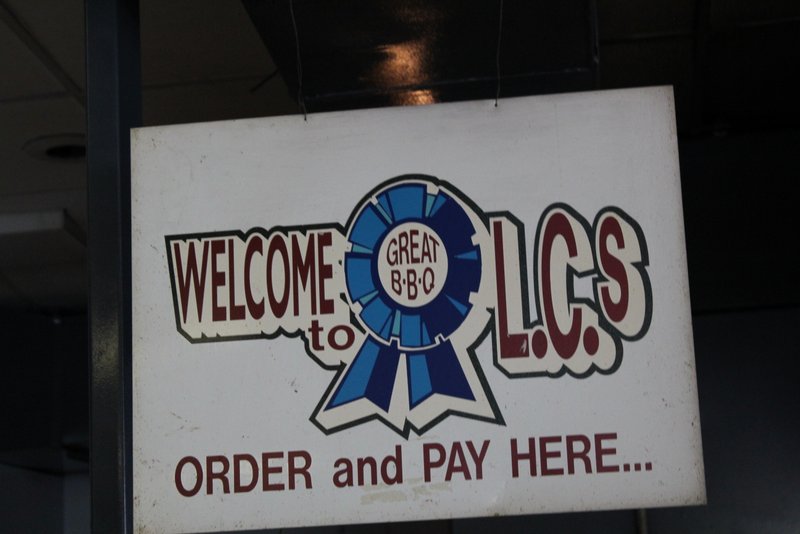 The credit card machine kept disconnecting. I didn’t have cash, or my checkbook. “No problem,” said Perry Foster, “mail me a check.” Perry Foster’s Bar-B-Que embodied all that is good about humankind: Trust and harmony and world peace. Oh, and taste. My lunch was a combo sandwich, generously endowed with smoked ham, brisket, chicken and burnt ends slathered with sauce, accompanied by a steering wheel-sized platter of homemade seasoned French fries. Perry and his cook laughed when I approached the sandwich with a knife and fork. “Your hands! Use your hands,” the cook coached me. “Eating barbecue ain’t pretty. It’s just good.”

A great barbecue joint goes beyond great food. Back when Perry Foster’s BBQ was in business on the south side of Warrensburg, several hundred photos adorned its walls. Among visages of Kansas City Chiefs and cheerleaders and Hank’s boy, Perry pointed to his favorite picture. “That’s the commander of Whiteman,” he said, “flanked by the two top generals in the Russian air force.” All three were smiling. When the Russian generals reported the highlights of their American experience, their favorite stop was Perry’s.

I sat back down, and finished exactly half my sandwich. Perry wrapped the rest, including the French fries, which I devoured the next day when I got home. But first, I sent him a check.

Barbecue is a way of life. It’s the foundation of our culture and will singlehandedly see us through tough economic times. Somewhere, there should be a mutual fund specializing in barbecue-related industries: sauces, grills, utensils, clothing and tailgating. Barbecue is the perfect marriage of sloppy and civil. It distinguishes humans from sharks.

If Atlantic City held a beauty pageant for words, barbecue would not win. The word can be spelled more ways than any other word in the English language. It’s imprecise. It’s messy, and impolitic, the product of smoke-filled back rooms. Yet more ballads have been crooned to barbecue than to all the Miss Americas combined.

I still remember my first bar-b-q. Miles outside of Jeff City, on a curvy scary road that led to the Lake of the Ozarks, the sweet smoke smell of burnt hickory permeated the rock walls of Alta Vista Barbecue. It was nothing fancy. And to this day, I dismiss any barbecue restaurant that looks too tidy. For example, folks flock to the rugged elegance of the world-famous Arthur Bryant’s in Kansas City. I frequent a couple other joints near Swope Parkway, Big T BarBq, and LC’s, right across from one another.

Rustic spots dot the landscape. Bates City Barbecue can raise a sweat on your brow. Biffle’s in Concordia will smoke your clothes on contact. When the wind was blowing right, I could smell the smoker from Sutton’s, just down the street from my house.

Cider’s BBQ in High Point has no windows. Outside there’s a big black smoker, and a hand-lettered sign that reads, “Sorry, Sold Out.” That’s a good sign, for those that got some.

My first dip into Dean’s was stealthy. A small group of us sneaked into the place, right under the noses of a billion horse trail riders camped across the road. Dean’s had posted a closed sign. Nothing against the horses; they might be welcome if they were carnivores, and if they could fit through the front door. But Dean’s is a tiny place, with a limited number of slabs coming off the smoker. They could never accommodate so many riders. We were lucky.

Counting back yards, there are more than two million barbecue spots in Missouri. Who has the best? Everybody. Just ask them, and savor their responses, one at a time. Each is different. Each has a story to tell. Andy’s Hickory Pit in Eldon started as a street vendor. Kehde’s in Sedalia seats customers in a restored Katy railroad car. Chuck Wagon just outside Warsaw claims they have the “best ribs you ever had.” Port Cape Girardeau is artful. Johnny’s Smoke Stack in Rolla burned down twice.

Yes, barbecue is dangerous business, and a dirty endeavor. Few souls eat barbecue after church, in their Sunday finest. Still, it can be a religious experience.

On a back road in the Bootheel, I had a barbeque epiphany. Just outside Puxico, at the Mingo National Wildlife Refuge welcome center, a crowd had assembled to discuss agritourism. When it was my turn to speak, I tried to flatter the locals. “When folks talk about barbecue, they mention Kansas City,” I offered. “But I know where to find the best barbecue in Missouri. It’s right here in Stoddard County, down the road in Dexter.” As soon as I mentioned two of my longtime favorite Southeast Missouri barbecue stops — The Hickory Log and Dexter Barbecue — folks started squirming and shaking their heads, flailing their arms and shouting “Strawberry’s!” I was puzzled, not knowing what strawberries had to do with barbecue. The crowd kept chanting, “Strawberry’s…Strawberry’s.”

“In Holcomb…in Holcomb,” they chanted. Thus I discovered a new favorite barbecue joint in the tiny Dunklin County town of Holcomb.

Dunklin is Missouri’s tallest county, standing almost 44 miles from its sole to its crown. It’s shaped like the left side of an hourglass, and stuffed mostly with cotton. Near the tiny waistline of this corseted county sits Holcomb. And Strawberry’s.

Indeed, the slabs at Strawberry’s are so tender, the meat falls off the bone from the vibrations of your voice. The sauce stands up to any Kansas City masterpiece, and if you want dry ribs Memphis style, Strawberry’s rivals the legendary Rendezvous, a block from Beale Street.

Back in 2005, Gourmet Magazine wanted Missouri to shove a favorite local dish under the noses of hundreds of food writers at Gourmet’s international food show in Los Angeles. Missouri sent barbecue. Strawberry’s topped the list, along with Gates BBQ and Jack’s Stack and Arthur Bryant’s and half a dozen other smokin’ savants. When the smoke cleared at LA’s Staples Center, Missouri ribs stole the show. Many attendees had never tasted barbecue before, and word traveled like a wild mesquite fire through the crowd. Lines of barbecue seekers snaked out the arena and around the block.

In an informal survey, only a half slab of them had ever heard of a pork steak. Funny thing, pork steaks. Missourians take for granted that the world enjoys them. But outside of a circle of states bordering Missouri, nobody knows what they are. Some people might respond if you said “sliced pork butt.” But why call them that? They’re pork steaks.

Like pork steaks, barbecue is a regional specialty. Everybody south of the Mason Dixon line believes they have the best barbecue. Carolina. Georgia. Tennessee. Texans, bless ’em, are no different, just more obnoxious about it. They think they originated barbecue.

Let ’em think what they want. From Dean’s to Bodeans, from Porky’s to Perry Foster’s, I know what gourmets know: Eat MO Barbecue.

0 Comments on “To learn the value of a culture, check their barbecue.”