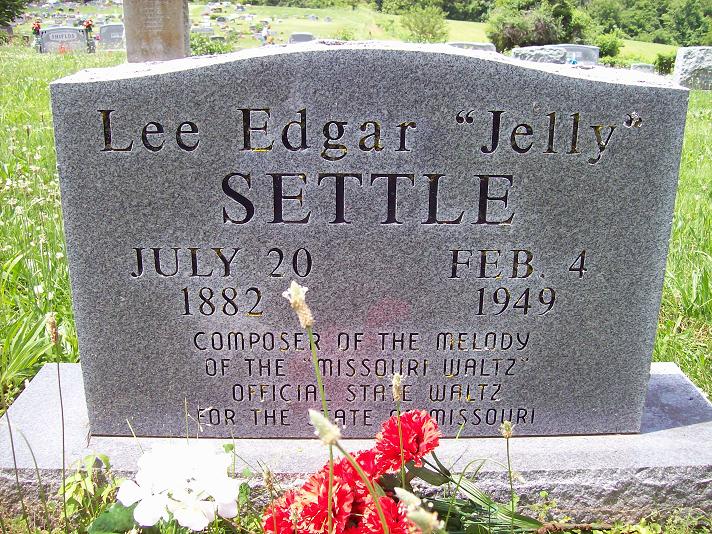 You’ve heard it a thousand times. At Mizzou games. On TV. Radio.

The Mizzou band begins the familiar strains of the Missouri Waltz. Then the song morphs into a march that brings the crowd to its feet, inspired, hands clapping.

The waltz turns into a march because, well, have you ever tried to march to a waltz?

That’s not the first time the song has been altered. Early in its life, the melody that became the Missouri Waltz apparently got hijacked from its creator.

Supporters of “Jelly” Settle, a composer from New Franklin, Missouri, claim he wrote the tune that became famous when President Harry Truman played it, and eventually became the state song. Jelly’s not talking. He was born in New Franklin, died in New Franklin, and somewhere in between, he wrote a tune called Graveyard Waltz. His friends say other musicians showed interest in the tune, and matched the melody to words that eventually became the state song, the one Harry Truman played.

But Settle didn’t get any credit until he was dead. Settle’s supporters claim somebody stole the melody from this poor guy, published it, made it famous, and took the credit.

Even the Missouri Secretary of State’s office has yet to credit Jelly Settle on its website: “The Missouri Waltz became the state song under an act adopted by the General Assembly on June 30, 1949. The song came from a melody by John V. Eppel and was arranged by Frederic Knight Logan, using lyrics written by J.R. Shannon. First published in 1914, the song did not sell well and was considered a failure. Sales increased substantially after Missourian Harry S. Truman became president, and it was reported that the Missouri Waltz was his favorite song.”

Even folks around Jelly’s hometown don’t know about him. I stopped at the Franklin School to find his whereabouts. “You know the cemetery where the guy who wrote the Missouri Waltz is buried?” I asked the lady who greeted me in the school office.

“Not familiar with that,” she said, “but there’s a cemetery about two miles up Highway 5 toward Boonsboro. Mount Pleasant.”

Sure enough, Highway 5 led me to the sign. It said:

Composer of the Missouri Waltz

A short drive down a gravel road leads to the cemetery, a beautiful spot on a sloping hilltop framed by forest land, overlooking undulating hills packed with mature cornstalks, holding their ears like pistols, patiently awaiting the reaper. I parked Erifnus, my car, and waded into the rows of tombstones, all shapes and sizes. My eye kept landing on the bigger monuments, expecting to see the name Settle. I finally stumbled onto a modest stone about collie-high, with a modest inscription:

Composer of The Missouri Waltz melody

So J. Edgar on the sign had become Lee Edgar on the tombstone. It’s just another inconsistency in a neglected life story. Edgar apparently didn’t care about the theft of his tune, but thankfully, friends and family attempted to set the record straight. And Jelly gets some notice, posthumously.

That wasn’t his only song. Composer, pianist, painter and poet David Thomas Roberts reports that “Settle was a big, bald man with powerful hands who began touring in vaudeville at 17.” Roberts calls Jelly Settle’s XL Rag a “gorgeous haystack-of-a-piece published in Sedalia… Let this suffice: it is the ultimate hymn of outstate Missouri.”

Sounds like XL Rag could have been the state song. Maybe somebody stole the wrong one.