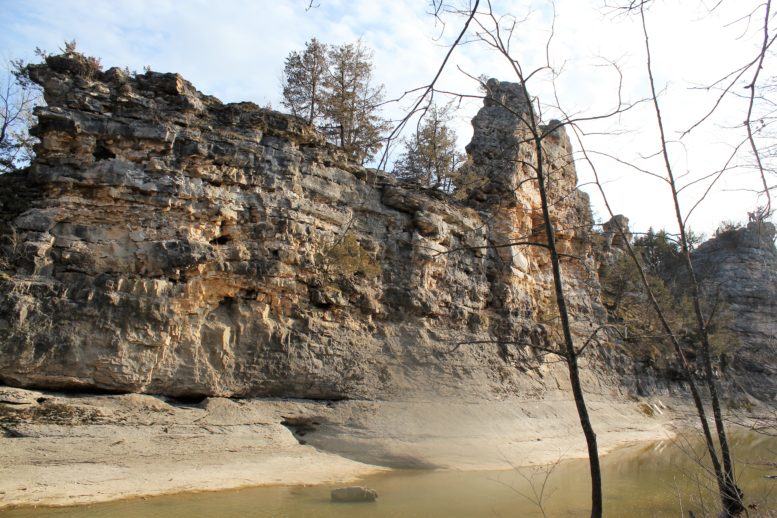 I drove a couple of miles north to a geologic marvel, a naturally sculpted breathtaker called the Pinnacles Youth Park.

Like the name suggests, the featured attractions are the Pinnacles themselves, 80-foot limestone towers carved by water and wind, pointing like fingers into the sky. And on these fingers people with the right combination of courage and skill can pretend they’re mountain climbers, or mountain goats.

Beneath the towers, in another part of the park, Shelving Rock is a ledge nearly half a football field long, forming a cave 40 feet deep. Its overhang has offered refuge for travelers for the last hundred million years or so. Smaller in area but no less awesome than Bryce Canyon, the row of pinnacle towers themselves are protected by the same force that carved them, two streams that surround the rocks. The streams warn visitors that when you cross the water to the base of the rock towers, you’re on your own.

The stark beauty of this geologic oddity has always attracted revelers. During prohibition, it was a popular spot to imbibe, away from the public eye. Later, for a time, several families maintained the land as a private gathering spot called “The Sturgeon Pinnacles Swim Club.” In 1965, the families put the park in a trust, and deeded the land to the Pinnacles youth board for 50 years.  The park keeps its gates open thanks to private donations, and the sweat equity of volunteers.