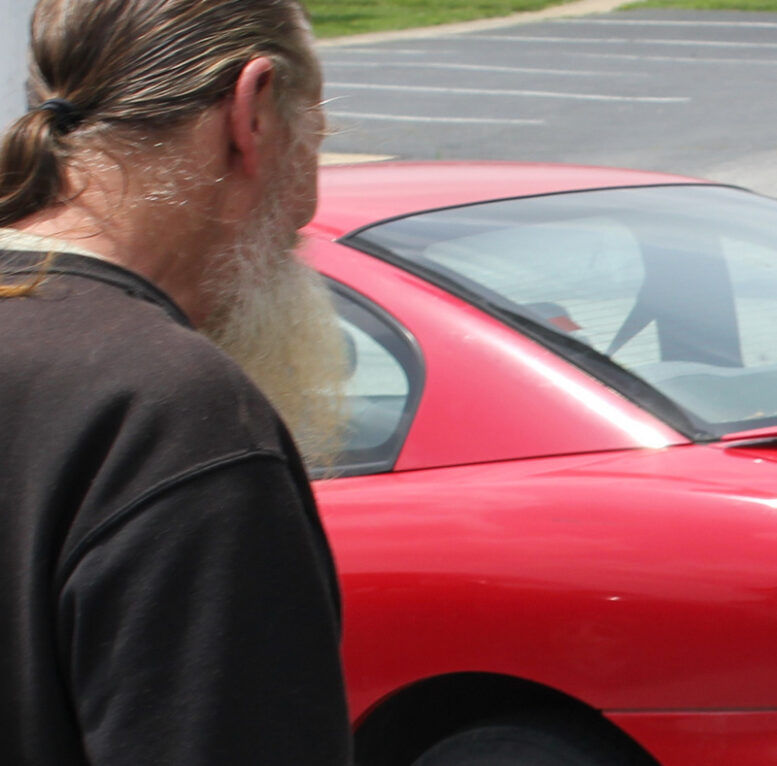 It was Friday, already scorching hot, and the sun’s heat shimmered on the highway ahead. My car, Erifnus Caitnop, pointed her nose toward Columbia, and we both looked forward to some rest after a grueling week on the road. By the time we returned home, Erifnus would show 290,000 miles on her odometer.

Cruising along I-70, we fell into the rhythm of the road, rolling without incident until Erifnus shot me a stark SOS. Her battery light came on, and I knew what it meant. Her alternator had quit, and she wasn’t making electricity. Without her pacemaker, she would die soon.

I turned off the radio, shut down the vent fan, and we kept driving toward the safety of home. I called her mechanic to give him a heads up. “Think we’ll make it?” I asked him.

The car kept running, 70 miles per hour, and hope springs eternal in old bones and brains. Maybe we could make it on the juice left in her elderly battery. But Erifnus was doomed, and the problem reflected in her eyes. The precious battery charge bled out through her headlights, shining in safety mode as they’d done since I drove her off the lot seventeen years ago.

In my mind, I prepared for the worst. If the car lost all power, we’d glide to the side of the road and I’d start making calls. The nearest mechanic. A tow truck. My wife.

We kept driving, and I tried to steer clear of thick traffic. But this was I-70.

Erifnus was showing symptoms of a heart attack. Passing Warrenton, her dashboard’s brake light came on. Two miles down the road, her headlight indicator began flashing. When the speedometer and tachometer started swinging wildly between zero and infinity, I knew her time had come. The big green highway sign told us the Wright City exit was a mile away.

We stayed in the right lane and I coaxed her like a thoroughbred rounding the final turn. She rolled up the ramp and we coasted into an empty parking lot.

Our landing pad bordered a typical interstate gas station. The mechanic bay was long gone, replaced by aisles of snack foods and Slurpee machines. At the side of the gas station, a man crouched, airing a front tire on a car which looked more seasoned than Erifnus. I approached him carefully because, well, you never know.

He jumped up from his crouch and pointed. “Just down the service road. You broke down? Wait a second, and I’ll give you a lift.”

The guy looked older than me, with a backwoods ponytail pulled back from a weatherbeaten face covered by a beard that some folks would label “Taliban” but in rural America was more akin to Duck Dynasty. His wiry frame moved like a crab through the car’s floorboards, picking up beer bottles and trash to make a spot for me.

A cigarette hung alternately from his lips and fingers as he spoke. “I’ll take you. I know the mechanic. Good guy. They got a wrecker. I always jump at the chance to help somebody.”

His enthusiasm was disarming.

Still, riding shotgun on this new adventure might turn out badly. I hadn’t hitchhiked much since college. In fact, the last time I stuck out my thumb, a hearse picked me up, reminding me the end is near.

“Vietnam vet,” he said proudly. “Always glad to help an American.” He sized me up, too, figuring I was a long-haired T-shirted ball cap-wearin’ good ole boy. He wasn’t wrong, really, since that’s how I was dressed. Truth is, on my travels along the back roads, I can play the good ole boy role, especially around banjo music.

He kept talking, a helpful trait that would give me clues. “I was a badass in my younger days,” he said. I believed him. “Came back from ’Nam and painted cars. ’Vettes. Mercedes. I own a Mercedes right now.” I didn’t ask why he was driving this old beater. He continued. “I don’t like to fight, but if they come at me…. Wife left me a couple years ago, ran off with another man. I thought about beating his ass, but I just let it go. The guy’s dead now, anyway.” He took a deep drag on his cigarette, through teeth the color of his fingers. “Women…” He rolled his bloodshot eyes. I agreed because, well, I was in survival mode.

“Let’s get you to the mechanic.”

I walked over to Erifnus, opened the door, and changed into running shoes, just in case, but left my camera and overnight bag and notebooks in the back seat. I cranked up Erifnus’s windows, locked her doors and gave her a goodbye pat, lest she never see me again. With a sigh I climbed into his car and began the next leg of this adventure. Seat belt for me, none for him.

He drove out of the lot and onto the street. I hoped this mission would not change from rescue to recovery. Images flashed through my mind. A body bag on a cold morgue slab. Cheryl. The grandkids. Would I ever see them again?

As we drove slowly toward the repair shop, the Samaritan kept talking through another cigarette. “Worked at a body shop fer forty years. Even painted commercial jets…dangerous stuff. Some guys got sick and died ’cause they took their masks off while painting. That jet paint hardened in their lungs and they suffocated. I’ll be sixty-eight next birthday. Got cancer and the doc says my days are numbered. So I’m just glad to help folks when I can.”

“Man, I really appreciate the ride…but I coulda walked. You got things to do….”

“Got nothin’ better to do than helpin’ a brother out.”

We got to the mechanic, but he was busy until Monday. Erifnus would have to lay over. Worse, the mechanic’s wrecker was stationed at an all-day off-road mud race. “Sorry,” he said.

“That’s okay, I’ll call AAA.” I whipped out my phone. The AAA agent reminded me that the tow was free for up to one hundred miles.

“You can get my car to Columbia?”

“Sure.” Done deal. But the wait for a wrecker was two hours.

“I’ll drive you back to your car,” the Samaritan said.

Erifnus was still there when we arrived, and the badass good Samaritan hung around the two hours we waited for the tow truck. I asked him if he minded if I took his picture. “No problem,” he straightened up a bit. “Just don’t use my real name. There are people wanna kill me.” I believed him.

A big guy rolled up to us, riding a Harley chopper with a dramatic sunburst paint job. “Hey, I noticed the camera,” he said. “I’m out shooting pictures of old barns. Know any good places?” I told him a few places to try. “Name’s Curtis Plunk,” he introduced himself. “People call me Curplunk.” [rimshot]

My two new friends began a passionate conversation about choppers and cool paint jobs and gangs and fights and bars and the law.

The Samaritan finished his dozenth cigarette as a flatbed wrecker backed up to Erifnus. Jack the tow truck driver tipped the flatbed and cranked Erifnus onto its deck, chaining her down like a French criminal. I said goodbye to Curplunk, and turned to the Samaritan to hand him five bucks. He refused. “I don’t take charity.”

Then I got an idea. I climbed the flatbed and dug a book out of Erifnus’s backseat and scribbled on the title page: “Thanks for saving my life. There are good people in the world.”

“Here,” I handed him the paperback. “You’ll be in the next book.”

—Souls Along The Road