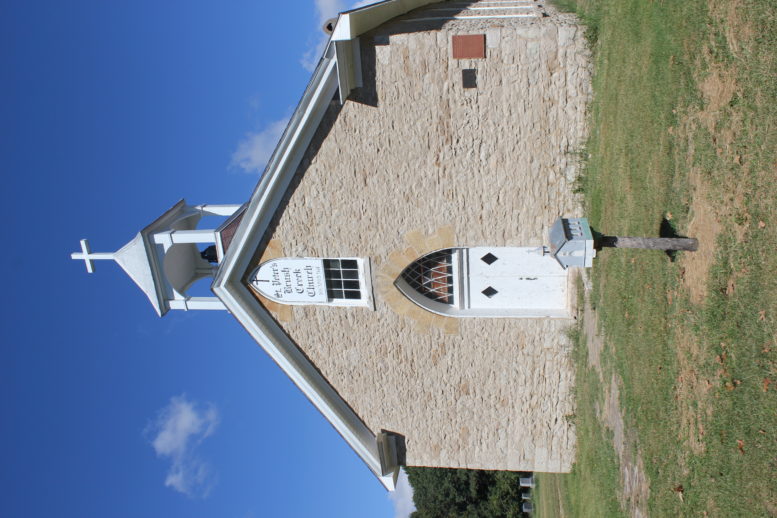 St. Peter’s Church casts its short shadow beside the cemetery, awaiting parishioners from Monroe City and Perry, Spalding and Rensselaer, as it has ever since the church was built back at the beginning of the Civil War. Nowadays, the faithful come to the country church less often. There are no regularly scheduled masses. But on the church wall a small plaque would help lead to a revival in its proud ministry.

The plaque hails this home parish of Father Augustine Tolton, a man who would break the color barrier in the American priesthood. Augustine was trained and ordained in Rome, because America would afford him no such opportunity. He was born a slave.

At his birth, the church’s baptismal record gave no name: “A colored child born April 1, 1854, son of Peter Tolton and Martha Chisley, property of Stephen Elliott; Mrs. Stephen Elliott, sponsor; May 29, 1854.” Peter and Martha, Augustine’s parents, were enslaved separately to neighboring families, so when Peter and Martha wed in St. Peter’s, the families agreed that any children would be owned by Martha’s owners, the Elliotts. Martha was Mrs. Elliott’s personal slave. As a child, Augustine was raised in the influence of the Brush Creek parish of St. Peter’s.

But in 1861 as parishioners were building the rock-walled church that struggles to survive today, Augustine’s father left to join the Union army. Soon after, Augustine left with his mother and two siblings. Stories differ about whether they were freed by the Elliotts or ran away. Regardless, the family rowed one night across the Mississippi River into Illinois and freedom.

Illinois offered freedom from slavery. But racism infected rural Illinois the same as it infected Missouri. When he wasn’t working in a tobacco factory in Quincy, Illinois, young Augustine attended a private parochial school at the urging of a local priest. The community howled in protest at this mixing of races. Parents threatened to take their children out of the school and quit the Catholic Church. They even threatened violence. Augustine was forced to leave the school, and years passed before another priest enrolled him in a different parochial school. Once again, parishioners threatened violence. But the priest insisted that Augustine stay in school. He ultimately graduated from Quincy College, taught by Franciscan friars.

Along the way, he knew he wanted to become a priest. But that ambition hit a solid wall of prejudice. He was rejected by every American seminary to which he applied, even schools that trained white priests to serve the black community. Supporters believed so strongly in his calling that they applied for him to study at Pontifical Urbaniana University in Rome. Eventually he was accepted, with the understanding he likely would be sent to Africa or New Guinea as a missionary.

Instead, in a move that disappointed Augustine, the Vatican sent him back to Quincy, amid the same racism and hate he had endured as a child. Yet the young priest quickly became well-known as Father Gus, with a reputation for giving inspirational sermons at St. Joseph Negro Church, where his powerful messages attracted an audience of blacks and whites alike.

Again, Father Gus heard protests about mixing races. He felt the heat from white citizens who targeted his ministry and even a few black preachers who bristled at his success. Some of the strongest protests actually came from the local Catholic Church hierarchy, who told him to stop taking money from white parishioners for his black church. Further, they ordered him to minister “only to Negroes.”

Not long after, Father Gus angered the gentrified community by agreeing to perform a wedding ceremony between a society girl and, according to the girl’s mother, an “unacceptable” person. Eventually Father Gus, his local superiors and the Vatican all agreed it was time for him to move on.

So he moved to Chicago, where the archbishop gave him “full pastoral jurisdiction” over the more than 27,000 blacks who lived in the city during the late 1880s. Augustine’s calm demeanor, punctuated by a passionate speaking voice, again attracted blacks and whites to his sermons.

On a hot summer day in 1897, he was returning from a retreat south of Chicago when he succumbed to the 105-degree heat and collapsed on a Chicago street. Hospital records say he died of heat exhaustion and uremia. Many of his contemporaries believe he worked himself to death. He was 43 years old.

As he requested, he was buried in a Quincy cemetery for priests. Yet prejudice followed him to his grave. He was buried deep in the ground to allow another priest’s coffin to be interred above his. Even his epitaph is carved on the back of that white priest’s headstone.