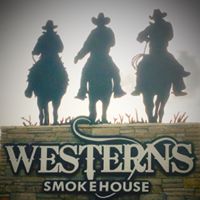 Coasting into Greentop, I would have bypassed the world’s greatest purveyor of smoked meats, without much more than visual contact with the big red building. But Sam Western had stuck his big barbecue smoker in the parking lot of Western’s Smokehouse, just inches from the roadside, and sweet hickory smoke wafted over the highway, compelling me to slam on the brakes and hit reverse in a manner that annoyed Erifnus Caitnop. Minutes later I was surrounded by brats and jalapeno sausage and elk snack sticks and restructured jerky, a hall of fame in processed meats, a small-town success story that’s achieved scores of awards and thousands of loyal customers worldwide.  They’re even a hit in Frankfurt.  And you know how discerning Frankfurters are.  I almost signed up for Western’s Meat of the Month Club, because you “Get a free meat stick with every order.” I resisted the temptation to shop hungry.  Instead, I chowed through a plate of barbecued beef and barbecued pork.  Then I fed Erifnus a meal laced with corn liquor, and we motored north. — from A Road Trip Into America’s Hidden Heart