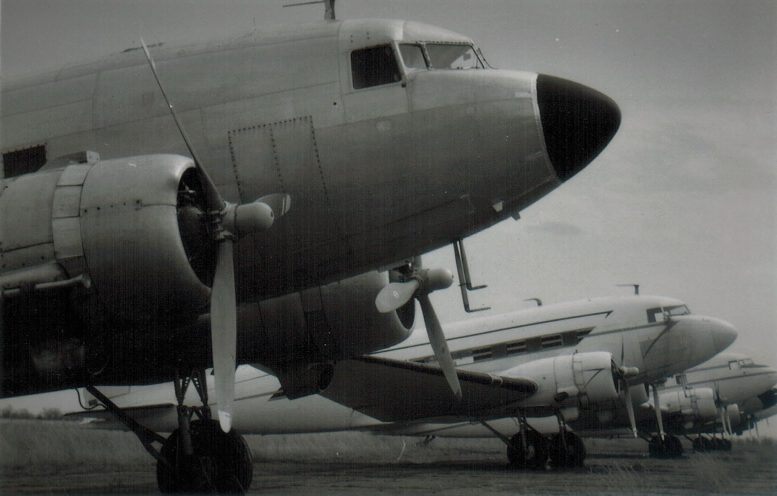 I left Route 66 and motored north from Rolla. At Vichy, a tiny fork in the road, I passed three familiar friends, three old birds that stood in the darkness a mile away. Even though I couldn’t see them, I knew they were there, because their giant wings have graced the same spot for three decades. There used to be four of them. They’re Douglas DC-3s, the closest thing to flying mules as you can get, for no other reason than they’ve been the world’s airborne workhorses for 75 years. The old planes are parked in an open field in a far corner of Rolla National Airport, a former Army airfield where glider pilots trained during World War II. The gliders were pulled aloft by DC3s, maybe even these same birds.

Indeed, the DC3 is the world’s most romantic airplane. It served as the first presidential airplane. During World War II, gliders were pulled aloft by DC3s. They were the pack mules of the Berlin Airlift, the beautiful green goddesses of the great old Ozark Air Lines, and the first airplane I ever flew in. My first flight was back in 1961, from Paris to Rome, and I had an inner ear infection, which made the flight miserable. At that same time, these three planes were still in service somewhere, along with thousands of other DC3s.

DC3s used to fill the skies, almost as many as eagles. Now, most of the remaining airworthy survivors cut through the airways of third world countries, or holiday air shows. My three silver friends have long been grounded. They finished their service in the 1970s as cargo planes for FedEx. Oh, they flew briefly back in 2008 when a tornado lifted and moved them 200 feet. But now they’re organ donors, keeping other birds airborne, offering parts from their powerful radial engines and brick shithouse bodies. Still, from a distance, they look ready to fly, these celestial meteors.