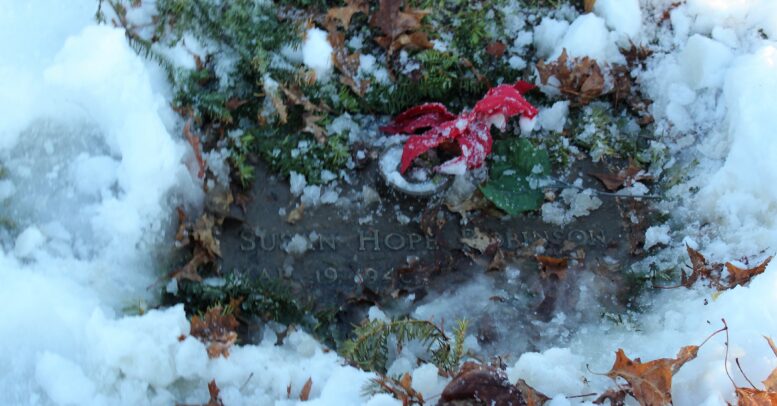 I wasn’t expecting this.

Time was running out to retrieve the holiday wreaths we had made to dress family graves. Grandview Cemetery warned us they would destroy decorations remaining after March 1. Fair enough. I jumped in my car and drove a hundred miles northeast.

I should have let the wreaths go. The fuel alone would eclipse the material value of the wreaths. But Cheryl and I had made them. I wanted to begin a tradition.

We left the February thaw in our rearview mirror, a thaw that had melted much of the thick layer of snow in our backyard.

But the thaw had not spread north to Hannibal. Grandview presented a perfect blanket of white over the graves, whose ten thousand markers lay flat like bronze windowpanes on the ground, beneath almost a foot of snow.

Having visited this cemetery a hundred times, I was confident I could divine the graves and save the wreaths from the Reaper. I parked beside the section where my family lay, and trudged a hundred yards to the general area where I knew they would be waiting. Snowshoes would have been better than boots. Rubber gloves would have worked better than wool.

Woefully unprepared, I still believed I could uncover the right plots.

I began to dig. The snow was a heavy mush, the consistency of sleet, a sheet cake snowcone spread thick across the entire park. Worse, a layer of ice insulated the ground from my wet fingers. I wringed the icewater from my woolen mitts, and dug some more. I found a marker and brushed away enough snow to read through the ice.

I dug again. Wrong again. I looked around to see if squirrels were laughing at me. The sun dipped toward the horizon. The temperature dropped.

I trudged back to the car and drove to the cemetery office. “I can’t find my mom.”

We looked at a map, and determined the graves should be twenty eight plots south of my car and seven body lengths east, allowing for headroom.

I returned to retrace my steps–carefully counting twenty eight plots south, measuring seven plots east–then began digging. Wrong. Wrong again. The sun set and my wool gloves dripped slush. I wiped away one last marker. Drake. My grandparents! I Cleared off their marker and tugged and pulled on the wreath until the ground’s frozen grip let loose.

Mom and Dad and sister Susan slept nearby. My frozen fingers clawed back the snow, and pulled the wreaths loose with the grace of a drunken grave robber.

Sorry, Mom, my visit was clumsy. But the wreaths will survive for at least one more hanging of the greens.