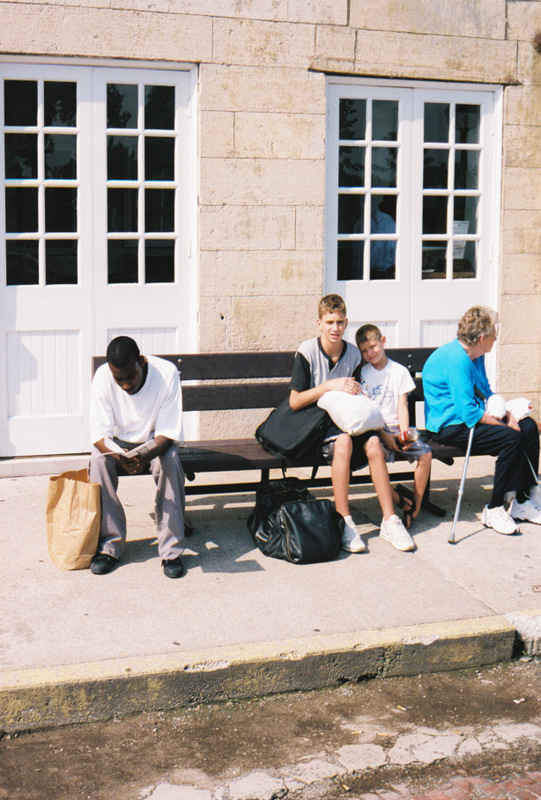 The train was late. That didn’t matter to seven men awaiting its arrival.

“I’ve learned to be patient,” said Mason, sitting next to me in his prison issue gray trousers and white T-shirt.

Earlier that morning, seven inmates had been released from three area Missouri correctional institutions. Guards gave them a lift to the depot. Two parolees awaited a train to Kansas City. Five were headed home to Saint Louis.

Three prison guards milled around the depot, not particularly mindful of their charges. Why should they be? The parolees were free men as of nine o’clock that morning. The guards handed each parolee a one-way ticket and a box of belongings, and waited around to ensure the parolees boarded their trains and left town.

Mason was going home after successfully completing substance abuse treatment at Fulton Diagnostic Center. “I had a UA [piss test] today, right before they let me out. I had a clean drop.”

My grade school-aged grandsons sat beside me, not appearing to pay much attention. This was their first train trip; I had brought them here to experience a ride on a mode of transportation that dangles on life support. The younger grandson asked why we didn’t just drive to Saint Louis. At seven years old he was too practical for nostalgia or history or anything rail related. “You will love trains,” I predicted.

The interlude with newly-released inmates was a bonus experience.

“How long were you in?” I asked Mason.

“I applied there once. They rejected me,” I told him, thinking in some perverse logic that he’d feel better, knowing that. He smiled.

Bad news. The train was running even later, an hour away. It didn’t faze the group of new parolees. “The air smells fresh,” Mason told me.

Six parolees still wore prison garb. The seventh wore brand new clothes. Joe looked crisp in his bright striped shirt, stuffed into blue jeans that shone, and Easter-white sneakers. “I’ve waited twelve and a half years for this day,” he beamed. His family would pick him up at Union Station in Saint Louis.

Stacked near the tracks were six cardboard boxes and two brown paper bags, all hand-marked with last names and six-digit numbers. One box was marked “TV.” Those boxes and bags represented the entire belongings of five men on their first day of freedom.

Mason said he didn’t want to cause any more trouble for his family. His father, a retired auto worker at the General Motors plant, would pick him up in downtown Saint Louis. And soon he would see his two children. He was proud of his kids. “They like jazz,” he told me. “Miles Davis. Coltrane. Learned to like it from their grandpa. I don’t know much about jazz, but they do. My daughter told me she went to a haunted house. She said it was hideous. Hideous. My eight-year-old used a word I never did. They got better schools than I had.”

“Ever been to the capitol?” I asked, nodding to the dome of the Missouri State Capitol, visible above the buildings behind us.

“It’s got my favorite room in the world,” I gushed. “A giant mural on all four walls of an entire room, with pictures of Frankie and Johnnie, and Staggerlee.” He’d never heard of them. I explained they were real characters who lived in the old Saint Louis tenderloin district, long since replaced by a giant football stadium.

“Ever been to Columbia?” I asked him.

As the train approached the station, I wished Mason well. We boarded separate ends of the same coach. As we waited to climb onto the car, my oldest grandson asked about the man I had been talking to. I told him.

Aboard the train, I watched the behavior of the men who were free at last. Perfect gentlemen.

Mason had paid his debt to society. Now as he prepared to enter the next phase of his life, his outlook reflected the practicality of surviving from minute to minute. His philosophy was uncomplicated when I asked him who paid for the ticket. “They brought me here. They can take me home.”

At Kirkwood we left the parolees sitting on the train. In less than an hour, they’d be dumped onto the streets of Saint Louis. I hope they’re ready.

Growing up in Jefferson City, I remember no homeless people, no street people. More than once as a kid, I heard that when inmates walked out of the Missouri State Penitentiary, officials told them they weren’t welcome here. “You’re welcome in Columbia,” the officials said.

2 Comments on “Rite of Passage”