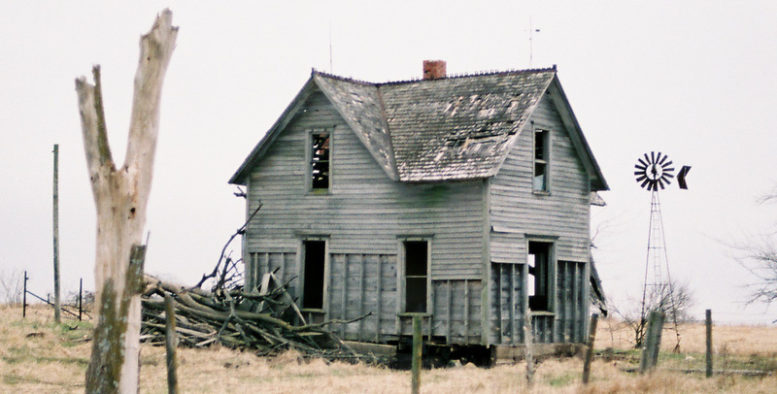 There are seeds in every abandoned house, in the dry rotted floorboards and the mildewy walls, in the moss on the roof where sunlight doesn’t reach. The seeds are in the windowsills, in the clawfoot tub with as many rings as Saturn, in the rusty water stain around the drain. The seeds hang with the chains that used to hold the front porch swing.

They’re the seeds of a Hawthorne or a Steinbeck, the kind that when nurtured and cultivated bring to life stories about the people who lived in the house, the old farmer who built the place, the mother who raised half a dozen children and watched helplessly as one of them died, and she cared for twenty grandkids and half again as many hens, and her ailing sister, too, and a succession of dogs and cats, each taking turn as the family favorite, each buried behind the barn in a shower of tears that didn’t stop until well into the reign of the next favorite pet.

Now the old house raises mice and foxes. Mother would be vexed.

The seeds are there.

They’re in the swales of her wooden stairs, swales dug by the heels of a million footsteps stomping up to bed, or skipping down to Christmas morning.

Now the house stands silent, sad, starving for shingles and paint, hands and feet. And laughter. And love.

Each year brings more pain to the old house. Her trusses and gables sag under the weight of neglect. Her parlors were settings for celebration and despair and the rhythms of life. Her kitchen was a beating heart, her dining table a classroom. She lives in a thousand memories, but those memories are fading too.

The old house waits, and hopes that a seed sprouts from a Hawthorne or a Steinbeck—or you—to tell a story that flatters her windows and walls, her doors and shutters, and keeps her heart alive. Even from a distance.

2 Comments on “On Seeds”