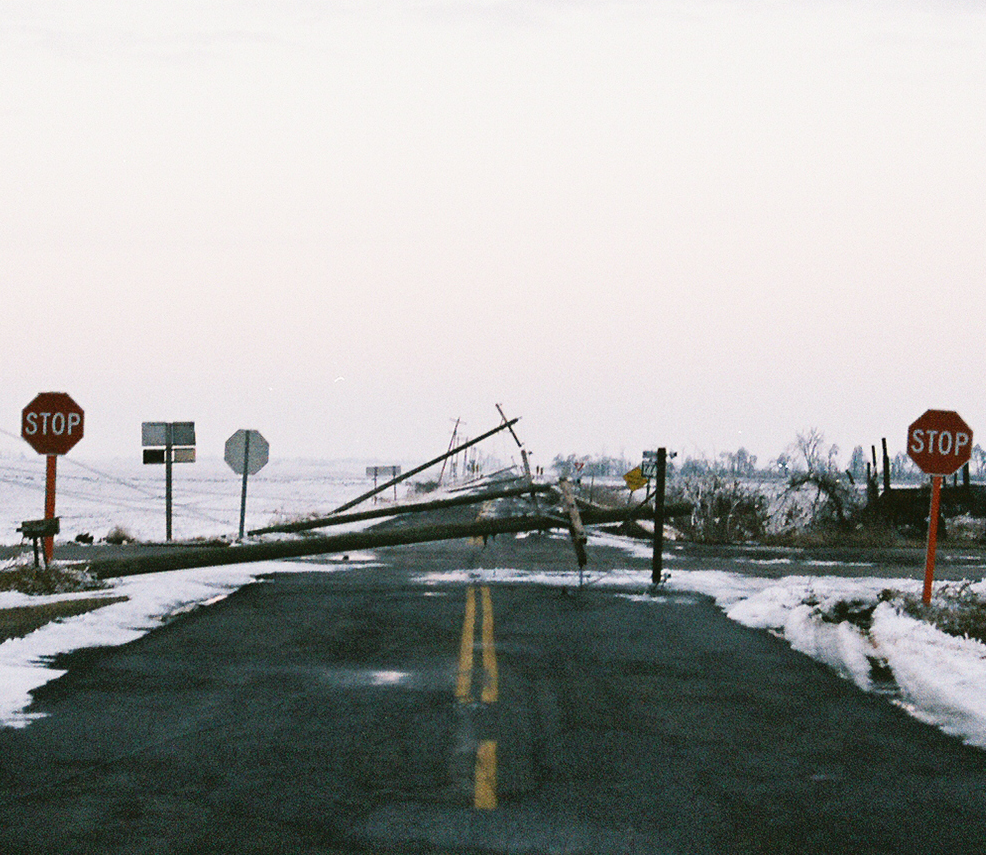 Long before The Weather Channel began naming continental storms, this one will be remembered as The Ice Storm of ’09. Its widespread devastation covered Missouri’s Bootheel like a glacier. In the two counties that form the heel of the boot, the ice brought down 12,000 telephone poles. 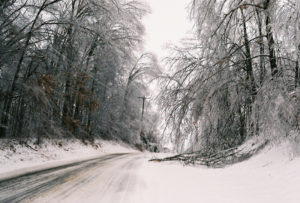 I drove the back roads of the Bootheel, and recorded what I saw:

The sign flashed a stark warning to travelers headed south: Last chance for food and fuel at Exit 99.

At that point, I realized I was driving alongside a convoy on a mission. A line of utility trucks extended from my windshield to the horizon, and behind me beyond the limits of my rear view mirror. The convoy pressed south on 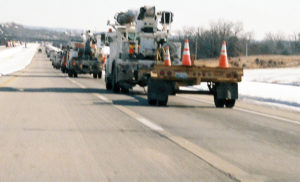 Interstate 55, past that last chance exit at Cape Girardeau, into an area described as a war zone, bad as a hurricane, a land laminated in thick ice.

The trucks with their booms and buckets formed a rainbow of colors, a jamboree of logos representing scores of electric utilities from a dozen different states. They traveled single file like an army supply line, amber lights flashing, into a hundred-mile-wide glacier that layered across America’s belly.

As the sun set behind the gray over 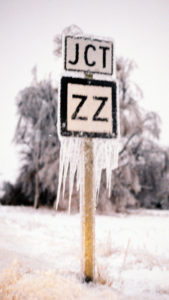 cast, a half dozen bucket trucks retreated to a truck stop along I-55 at Benton.

They joined a scene that could have been a science fiction movie, a parking lot full of bucket trucks — four or five dozen — arranged randomly, as if dropped haphazardly by the same storm that summoned them here. Yellow lights flashed on their crowns and cranes as crews sat, tired occupants taking a brief respite, eating or sleeping or planning their next move.

It reminded me of a night in New Madrid three decades ago, a night when Iben Browning had predicted the next big New Madrid earthquake. On Browning’s predicted date, reporters in their TV trucks flocked to that tiny town. No earthquake.

On this icy night, few TV trucks had yet to penetrate the area. But the utility trucks were there, their numbers growing. These trucks crowded into the same small space for the same reason eagles winter in the space below river dams. It was an oasis amid the ice.