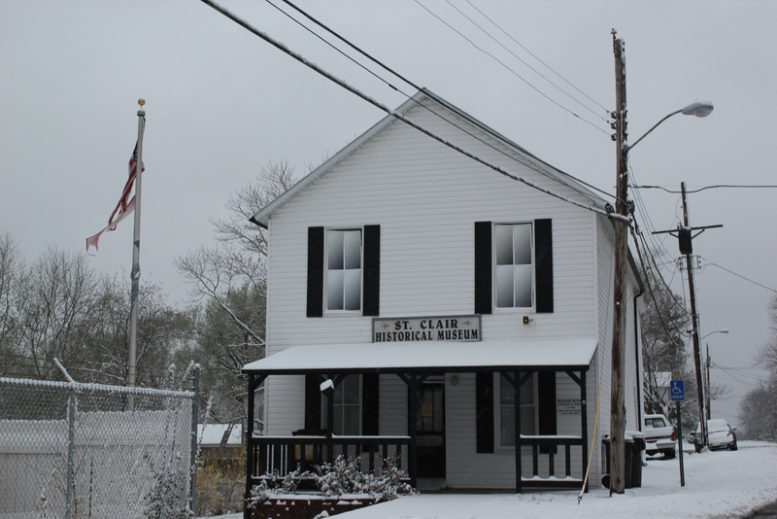 Lewis Café doesn’t look like much from the outside. It sits on Main Street in downtown St. Clair under an old 1930s-looking awning in an old 1930s-looking beige brick building. But in the restaurant world, the homely facade means there’s a good chance to find home cooking inside. As soon as I entered, I knew Lewis Café was a keeper. Hardwood floors. Chrome-plated chairs with vinyl seats pushed up to tables that had local business ads laminated inside. Real pictures on the walls.

And I was right about the home cooking. The onion rings are homemade. The coconut cream pie is homemade. The chili is homemade. The beef is home grown. I was at home on the road, a rare feeling. I counted the booths. Seven. Across from booth row, seven squatty stools stood at the low counter. The place radiated good vibes. Daniel, the server, was the owner’s son. He was enthusiastic, with no hint of preacher’s kid attitude. More important, when he said that today’s blue plate special was outstanding, I believed him.

Virgil Lewis started this café in 1938. Back then, Lewis Café featured the same seven booths, same seven stools at the counter, same dedication to homemade pies and home-grown beef.

I ordered the special, a country fried chicken breast smothered in homemade gravy and surrounded by peas. Daniel recommended homemade poppy seed dressing for my salad. Outside the storefront window, the snow came down in flakes the size of Frisbees. It made the restaurant even cozier. An elderly couple came in from the blizzard and took a seat. The woman was distressed by the weather, and further distressed by her dead cell phone. She couldn’t call her destination to report their travels had been interrupted. I loaned her my cell phone.

Daniel arrived with my meal, and I ate as the snow piled up outside. When I finished, I asked Daniel for directions to the St. Clair Historical Museum.

“Easy,” he said. “Go down Main Street one block and make a right. Can’t miss it.”

Sure enough, I saw the big painted museum sign above the door of an old house on the corner. Through the falling snow I could read the museum’s business hours: “Open 1 – 4 p.m. Saturdays and Sundays.” I was in luck. It was 2 p.m. Saturday. So I pulled to the shoulder and stepped out into four inches of fresh snow. As I walked to the museum entrance, I noticed that my tracks were the first upon the front porch. I tried the door. It was unlocked. So I entered.

No answer. The lights were turned off, and it was apparent that no curator was present. That’s understandable. Who would expect a visitor to a small-town museum on a snowy afternoon like this?

I fumbled around in the darkened room for a light switch as a staccato beep began to register in my ears, soft at first but getting louder with each successive beep. The burglar alarm! I hesitated, and considered looking around the museum for a bit while waiting for the police to show up. I’d just explain to the cops that I came to see the museum, that the sign said it was open.

Then I envisioned handcuffs and delays and fingerprints and lengthy explanations and 18 coats of paint on the iron bars across the front of the cold confines of a rural jail cell I’d be sharing with some sobering-up wife beater. So I calmly exited the house, shut the door behind me, and waited for the cops. Nobody showed up, even though I could see the police station from the porch. The beeping intensified, blaring from a loudspeaker above the museum’s old farmhouse door. I slowly walked toward Erifnus, allowing plenty of time for the authorities to respond to the alarm.

But nobody showed up. I scraped an inch of new snow off Erifnus’ windshield, climbed in the cockpit and backed onto a side street. I took my time turning Erifnus around, leisurely driving back up to the main street, and looked for a policeman. But nobody. They must’ve been busy attending to a dozen fender benders on the slick streets. I drove around town, taking pictures of an old Frisco caboose and the old International Shoe Company, a big empty brick building that dominates the eastern end of downtown. We circled back to the museum. The alarm was turned off. Nobody was around. We made tracks out of town. — A Road Trip Into America’s Hidden Heart