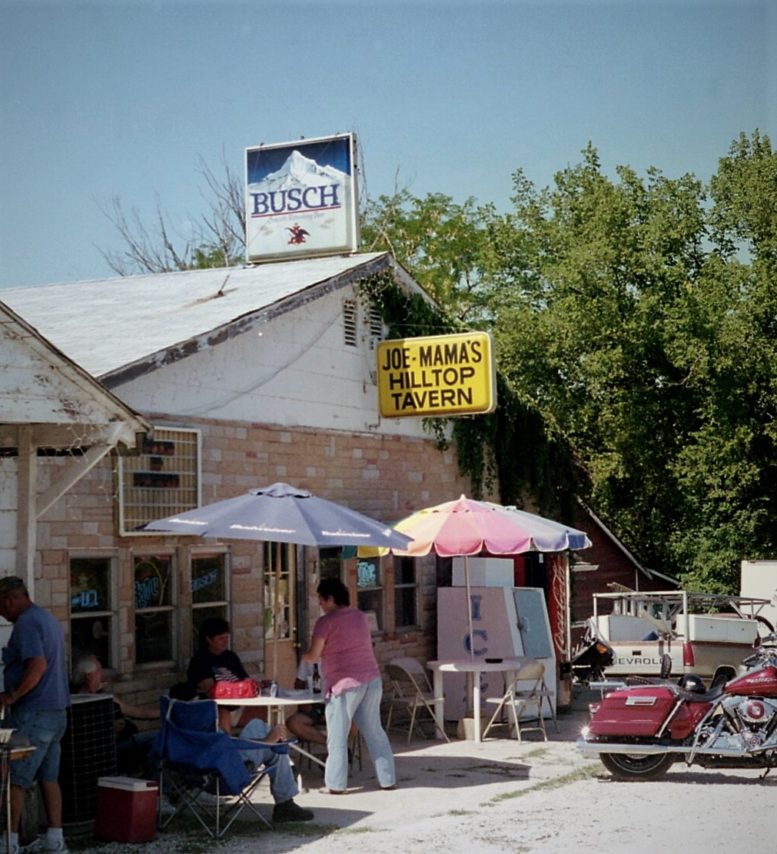 We—my car and I—drove through Frumet, over Flucom Creek, past Tanglefoot and Melzo, Horine and Old Ditch. We crossed Skullbone Creek, and passed the ghosts of Moontown School, Mothershead School and the old Saint Joseph Hill Infirmary for Aged and Chronic Incurable Men.

Moving along the western perimeter of Jefferson County, my car zagged off Highway 30 down Route W, where we rubbed bumpers with the folks in Grubville at Joe Mama’s Hilltop Tavern. Cars parked bumper to bumper on both sides of this country road. We seized the only open parking spot beside the front porch where people sat around two tables framed by a pair of sleek Harley Davidsons. Near the group stood a deep fryer the size of an old tub washing machine. The cook and I greeted each other with mutual curiosity. He wondered who the hell I was. I wondered how I could politely partake in his Grubville cuisine.

“How much for some catfish?” I cut to the chase.

“No charge,” he startled me. “Buy a beer, get some food.” Fair enough. I tipped my cap and went inside.

This seemed to be a special occasion, but maybe the gathering was ritual in these remote hills, as families huddled together around four-top tables, taking turns refilling their plates from the mothership table spread thick with carry-in dishes. Home-grown tomatoes. Sliced cucumbers and onions. Baked beans.

Joe Mama’s is the real deal. They keep it simple, and except for big feeds like today, the tavern specializes in two basic food groups: cans or bottles.

The place was crowded. But then, from what I hear, it’s always crowded, this being the gathering place for miles around. There were no open seats at the bar, polished by the elbows of a dozen generations. Locals offered snippets of history about the place. It’s survived almost forty years with the same name. Used to be a gas station. Before that, it was a Model A showroom.

An old country tavern might cause kids to get bored fast. Yet the Grubville children were fully engaged in games of tag and hide-and-seek, buzzing through the crowd of adults like horse flies, not an iPhone in sight.