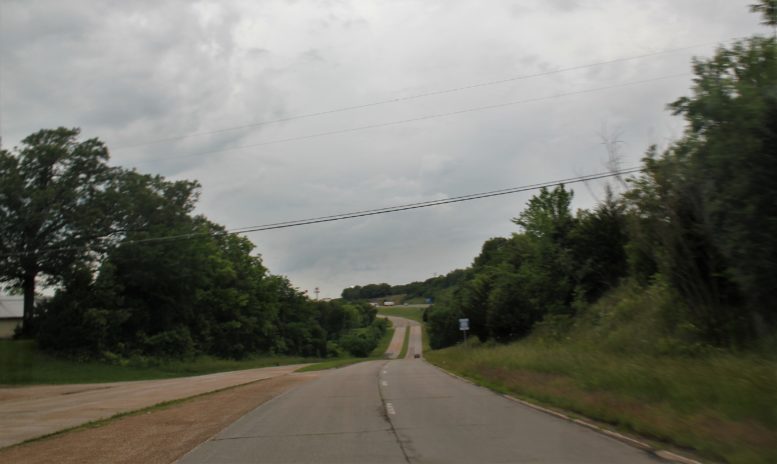 Fort Leonard Wood demonstrates the discipline you’d expect from a school that cranks out military police officers and crime scene investigators – and engineers, adept at road building. It’s fitting, then, that St. Robert sits on the edge of rugged hills and steep ravines, the most difficult passage along our nation’s most celebrated road. A perfectly preserved stretch of original Route 66, lips and all, cascades from town toward the confluence of two rivers.

Sunset Village sits along the way. It’s a retirement complex that’s aging gracefully along with its residents. Just downhill, Big Louie’s stage used to support a titillating lineup of naked ladies. This road is a metaphor for the wages of sin, especially for a patron of age: the walk downhill from Sunset Village to Big Louie’s was easy, the return home was rough.

Avoiding the wages of sin and the expenses of nightlife, I motored straight to the local Fairfield Inn. Next morning, Erifnus rolled me downhill on concrete ribbon that’s older than most of the residents of Sunset Village. As we passed, the octogenarians were finishing their second cup of coffee, and the strippers were still sleeping.

Further downhill, a wide spot in the road offers an overlook, a panoramic view of Devil’s Elbow, a riverbend that’s the mother of all logjams. Through the trees, in the steep valley below, the hairpin riverbend was just out of sight. But I knew the story. Around the time of the Civil War, new railroads cut through this rugged region, and a rough and tumble breed of lumberjacks called tie hackers cut down all of Missouri’s forests to make railroad ties. Near Arlington, at the bottom of this deep valley, loggers attempted to shove billions of logs downriver. But they couldn’t squeeze enough log rafts through this tight bend fast enough for a hungry sawmill that needed to produce 3,000 cross ties for each mile of track. The bend was punctuated by a giant boulder that wouldn’t budge. It was put there by the Devil, the loggers believed. Logs piled up in the bend like early-bird shoppers on Black Friday. The loggers named the bend Devil’s Elbow.

At the bottom of the hill, old Route 66 rolls past the town of Devil’s Elbow, where not much has changed in a hundred years. Oh, Miller’s Market has changed to Allmon’s Market, and changed again to Sheldon’s Market, but it continues to do what it’s done for my entire lifetime: sell everything you’d need to survive, and serve as the post office, to boot. I crossed the 90-year old truss bridge that was the first Route 66 bridge across the Piney River, then traced along the Piney to view an engineering marvel called Hooker’s Cut. Half a century ago, Route 66 changed course when a newer version of the highway blasted a deep slice through a mountain and laid four lanes through this gnarly area for the first time…the last section of Route 66 to become four lane. The new passage — Hooker’s Cut – helped cross-country travelers make better time across this rugged valley.  The name Hooker comes from a town nearby, and not from the whores who chase the servicemen up on the knob. I paid my respects to the Hooker Church and Hooker graveyard, and the old Hooker High School, and John L. Hooker, the woodsman whose name is used for these icons, and John Lee Hooker, too, for no other reason beyond power of suggestion, then turned my attention back to the little side road – the very first Route 66 – and the Elbow Inn.