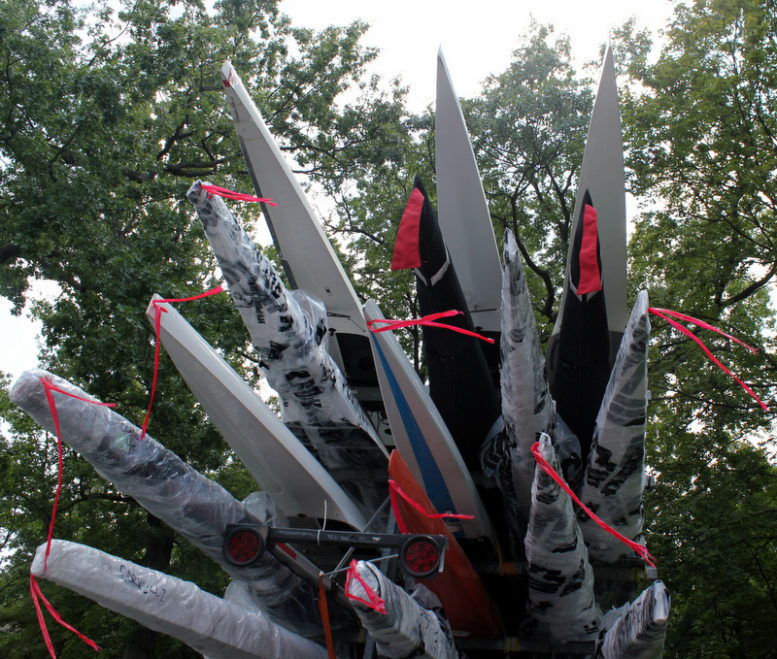 You don’t see this every day, not on a Midwest neighborhood side street.

In one of Columbia’s stately old neighborhoods, a sweet spot tucked behind Garth and Rollins streets, populated by eighty-year-old trees and the professors who planted them, the streets are quiet, more bicycles and dog walkers than cars, only an occasional UPS van.

Parked on a narrow side street sat a glorified canoe trailer. Along its super-stretch length, the towering trailer’s stack of boats had little resemblance to canoes. They looked more like a clutch of arrows lashed down by Lilliputians, restrained from cutting through water until their fetters are unleashed and their bottoms get wet.

These boats–$1 million worth of Pocock racing shells–were headed east from Everett, Washington, to university rowing crews at Duke, Cornell, MIT, Syracuse and others. Some boats were brand new, virgins to the butts and shoulders that would propel them. Others were veterans of races on the Charles River or the Schuylkill. Names emblazoned on their hulls honored the sport’s dearest: Pearl Corkery, Ms. Lin, and She Persisted.

As I passed this unusual sight, one of the drivers, Ben, was checking the trailer. Ben was patient as I introduced myself with an obvious line.

“Strange place to see these beauties.”

He explained they had overnighted in Columbia with friends. Soon these shells would be back on I-70, demonstrating their aerodynamic skills among truckships.

Until he took this job hauling racing shells for Finish Line Shell Repair in Baltimore, Ben was a crew coach for Duke University. He showed me the boats like they were his children, and explained more about crew racing than this Midwestern rowboat novice ever knew. We parted, and I went home to get my camera. When I returned, Ben and the truck had left to get fuel. But the trailer was still there. So was a neighbor, Carol, who told me two serendipitous stories.

“I was driving home,” Carol said, “and had just started listening to [Books on Tape novel] The Boys in the Boat when I turned onto our street and saw these boats.”

The Boys in the Boat is a riveting bestseller about nine blue-collar kids from the University of Washington who surprised the Nazis—and everybody else—by winning the gold medal for rowing in the 1936 Olympics in Berlin, the same Olympics where American sprinter Jesse Owens threw a wrench into Adolf Hitler’s myth of Aryan supremacy. Author Daniel James Brown explains, “Against the grim backdrop of the Great Depression, they reaffirmed the American notion that merit, in the end, outweighs birthright.”

Then Carol shared a story Ben had told her. As University of Washington workers cleaned out a dusty corner in the crew boathouse, Ben saw an old paddle obscured by crates and grime and time and neglect. He asked if he could have that old paddle. When he cleaned it, he found the signatures of the coach, the coxwain and the eight rowers who won that 1936 gold medal.

He donated the paddle back to the school.

They say team sports build character. Eighty one years ago nine working class kids shocked the world. They leave a proud legacy in an uplifting story, and for a moment, on a quiet Columbia side street.

One Comment on “Crewless from Seattle–Columbia Channels Olympic Royalty”