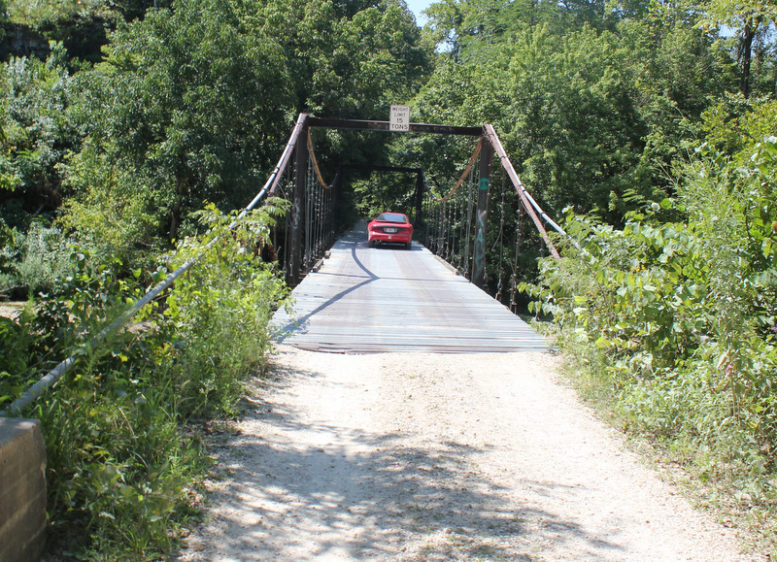 Leaving Tuscumbia is still an adventure on the back roads. No less than five swinging bridges aid in connecting Miller County.  Four can support your car, if you’re brave.  The fifth supports your drinking habit.  I knew about the good people around Brumley, who love to party, and sometimes end up in fights.  So when I went to the Swinging Bridges Bar, I was glad I was part of the band.  Usually people don’t pick fights with the band.  Beyond bad manners, fighting interferes with dancing, as dancers stop to watch grown men grope each other.  But I found the place to be charming, rustic as a ball pean hammer, and the people friendly and appreciative that a band would venture into the backwoods wilderness to strut their stuff.   I always heard that Brumley was a rough and tu 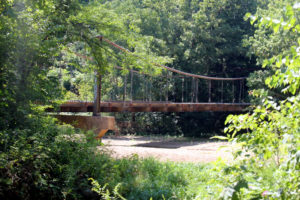 mble place.  Maybe it is.  But the folks there treated us with respect.  A few years later, there was a murder nearby.  But heck, I’ve lived places where there’s a murder every week.

Obviously the Swinging Bridges Bar was named for the area’s primary attractions.  Without a movie starring Clint Eastwood, the people of the world are unlikely to unite to preserve this network of swinging bridges that circle this town like drawbridges over a moat.  Hiding in the folds of Miller County like tax evaders, these swinging bridges cause squeamish travelers to turn back.  Not my car.  Erifnus approaches danger like Harry Houdini.

Joe Dice built them back in the late ’20s and early ’30s, a tremendous feat for the day, especially considering that Joe left his Warsaw gradeschool at the age of 10 because he couldn’t see very well.  He was never formally trained as an engineer, and never drew a blueprint.  He built these bridges by feel, using twine to measure distance and curves, and horses to pull the wires across the streams.  And he built them to last.  He designed 40 bridges, and built at least seven of them in Miller County.  Erifnus found the four that still feel rubber tires on their backs, and we crossed them all.

In fact, Erifnus got a present.  She was a

pproaching a milestone, and I timed our approach to give us both a thrill.  The swinging bridges of Miller County are scary, since this network of spans hides in the most remote part of the world, and they’re among the oldest of their kind in service. The bridges are not particularly pretty. Nor are they romantic in the sense of covered bridges like the ones Robert Waller made famous in Madison County, Iowa.

But they sure are unique.  And remote.  Did I mention that?  It’s a bad place to have a flat tire or engine failure.  Sprouting from banks overgrown with jungle-sized vegetation the old bridge supports look rusty.  Hell, they are rusty, suggesting that maybe the suspension cables have been compromised by weather and time.  Each bridge is a 20-ton reminder that a chain is only as strong as its weakest link.  Each bridge floor is a chain of ten dozen planks.  Could a car fall through the old wooden plank deck of a swinging bridge? As unlikely as it is that all the wooden planks would give way, it’s disconcerting to look through the gaps caused by missing planks to the swirling current below.

Aside from those fears, largely unfounded, our biggest problem was an autumn sun that would set within the hour.  Undaunted, we rolled toward the Auberge Swinging Bridge.  Erifnus’ odometer rolled over 250,000 miles square in the middle of that span.   It may not sound like much, but it was a leap of faith for me, to entrust my car’s quarter-millionth birthmile to the back of an ancient bridge built 90 years ago by an unlicensed guesser.