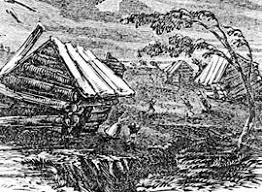 In the History of Southeast Missouri, eyewitness Godfrey LeSieur gives this account of the New Madrid Earthquake:
“The first shock was about 2 o’clock a. m., on the night of December 16, 1811, and was very hard, shaking down log houses, chimneys, etc. It was followed at intervals from half an hour to an hour apart by comparatively slight shocks, until about 7 o’clock in the morning, when a rumbling noise was heard in the west, not unlike distant thunder, and in an instant the earth began to totter and shake so that no persons were able to stand or walk. This lasted a minute, then the earth was observed to be rolling in waves of a few feet in height, with a visible depression between. These swells burst, throwing up large volumes of water, sand and a species of charcoal, some of which was partly covered with a substance which by its peculiar odor was thought to be sulfur. Where these swells burst, large, wide and long fissures were left running north and south parallel with each other for miles. I have seen some four or five miles in length, four and one-half feet deep on an average, and about ten feet wide.” LeSieur reports that a second, equally devastating series of shocks occurred three weeks later, whereupon residents “fled in dismay, leaving behind their stock and even many of their household goods, all of which were appropriated by adventurers and carried away in flatboats.”