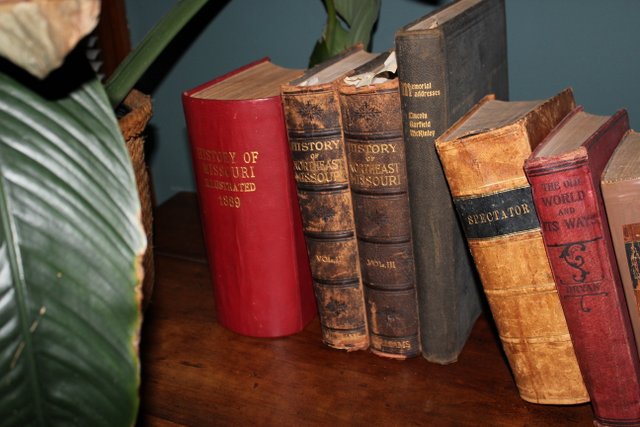 “How much for books?”

Dan didn’t quibble. He knew what he wanted. Hard back classics. He rummaged through several cardboard boxes and plucked out a half dozen keepers. A collection of Jack London short stories. Aldous Huxley’s Brave New World. And a 719-page story that begins, “Scarlett O’Hara was not beautiful, but…”

Dan’s eyes grew wide when he snagged a four-pounder. It may have been his best catch of the day, an 1853 Works of Lord Byron, complete and unabridged, even as it sat without a cover on its back and spine. “That’s okay,” he thought to himself, “when I’m 160, I won’t have a cover on my spine either.” He held the book tight like a new toy, even though he knew that for the rest of his life, he wouldn’t sit still long enough to get through its 1100 pages. “Reference,” he whispered to himself, justifying the acquisition.

“Good selection,” the owner said as she accepted his money.

“I never read Gone with the Wind,” he blurted. “But I did see the first half of the movie.”

She looked at Dan with pity.

“The Byron!” He changed the subject, clutching the old book with both hands.

“Yeah,” she sighed. “I’m an English teacher…” She explained that she was getting ready to act on her life’s goal, and launch into serious creative writing. Dan wasn’t sure why she’d want to get rid of these classics. But she is an English teacher. She probably memorized most of this stuff…sees it in her dreams. Now she’s changing course, from full-time teacher to full-time writer.

Many of life’s transitions are marked by yard sales.

Dan held up one of his newfound treasures, a study of T.S. Eliot. “I used to live on Westminster Street in St. Louis,” he gushed. “In the house where I lived, one neighbor was T.S. Eliot. On the other side, Tennessee Williams grew up.”

“I didn’t know T.S. Eliot was from St. Louis,” her yard sale partner spoke up as he put the books in a pair of grocery bags.

“Most Brits don’t either,” Dan laughed. He thanked them for the treasures, and wished her luck in her literary career, and took off down the street on his bicycle, two bags of books hanging from his handlebars.

Dan smiled to himself as he rolled up to his back door. It was only a split-second impulse that he even stopped at that yard sale. It was late afternoon, so his timing wasn’t good yard sale strategy. “The bargains are long gone,” he could hear the members of the Serious Yard Sale Society chiding him.

That’s okay. Professional yard salers, the ones who show up at 5:30 am, aren’t usually after a textbook on Eliot or a battered book of Byron. Neither was Dan, until he stopped, and flipped on his OCD switch labeled “books.”

Every yard saler’s switch is unique. Like a fingerprint. And every yard sale is a psychological study. The sellers gather and organize clues to their past and spread them on a grid for buyers to pick over like blackbirds. A carny of card tables and cardboard boxes serve up a mix of function and folly, kitsch and utensils.

Yard sales operate on the simple principle that beauty is in the eye of the beholder. Dan remembered a good friend who used to buy anything with a poultry theme. Egg timers and poachers. Prairie chicken salt and pepper shakers. Rooster lamps. Cast iron skillets with a laying hen lid. Everybody needs one of those.

Over and over, yard sales offer the best proof that Elvis is still alive.

During his wasted youth Dan never cared much for spending his time at yard sales, until he had an epiphany. A couple of years ago, he passed a row of boxes on a residential curb near his house. It wasn’t a yard sale. Somebody had cleaned out a roomful of dusty old books, and set them on the curb. Maybe the books ended up curbside because of a marriage breakup. Or maybe the books’ owner died, and the spouse could finally unload all those dust magnets. Who knows? But he pulled to the curb, parked his bicycle and instinctively dug into the boxes. He culled four dozen hardbound beauties – Joseph Conrad, Kafka, Crime and Punishment. Things he knew he should have read in his formative years.

As he stood there, a stranger in a strange front yard, he resolved to comb the yard sales and collect the classics, and read them, as many as he could.

Other drivers began to stop along the busy street to pore over the boxes, too. This sent a feeling of alarm through Dan’s body, much like a ’49er must’ve felt when he saw other prospectors climbing the mountain toward his gold mine. From somewhere deep in Dan’s DNA, the earlybird shopper gene emerged, and he packed his selections into one big box, guarding it like a goalie. The box was big enough to hold a sheep. Loaded with books, it was heavier than a window air conditioner. Balancing it on his bicycle’s handlebars, he attempted to pedal this unstable pyramid toward his house. But lacking the balance of the Great Wallendas, he ended up walking his booty home.

Hoarding? Sometimes his family suspects so. They don’t understand that this is a special brand of punishment, a self-imposed penance. In high school, he faked his way through English lit. Reading Silas Marner was as difficult as staying awake in church. Memorizing Shakespeare was drudgery. The scarlet letter on his chest was a big S for slacker. His ambivalence continued through college, where he skimmed a whole library of Cliff’s Notes.

And it’s poetic justice that he confess to an English teacher that he took cheap shortcuts through literature, even as he plucked a Byron out of her box.

Some day, his family will have to dispose of his lifetime collection. He hopes they find good homes, those books, where their pages will get a workout and their backs and spines will wear.

For now, he has ten dozen books in the queue. And he hopes to read them all. At the very least, he hopes they fall into the hands of the next reader.

Passing on knowledge is the most satisfying form of recycling. That and yard sales.