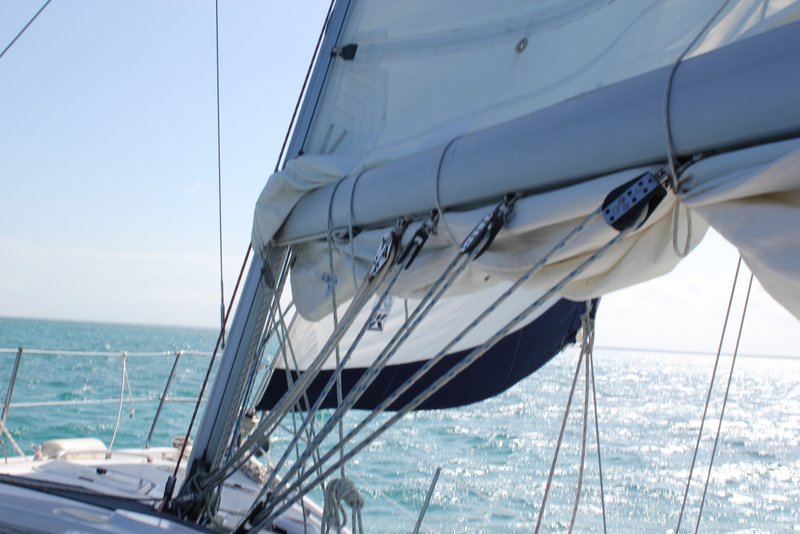 As I sit in my sun room and watch gale force winds sweep dead leaves from the trees, I think back to another wind that took a close friend.

The grand roster of tempests lists a thousand other storms that have taken much more from all of us. Joplin. Tuscaloosa. Moore.

Today’s wind—a fast moving prairie low pressure system— poses more threat to limb than to life. Still, I know that if this tightly wrapped storm, a cosmic comma, were placed over warm water, it would have a name.

From the safety of my sun room, I recall the day I was on the open sea, and the outer bands of a gale first hit our boat.

The boat was a 40-footer, a French sloop we’d sailed to the island of St. Bart’s, where we got bad news. A tropical depression two hundred miles southwest of us was expected to blossom overnight into a tropical storm, and the muscle of its tightening eye was moving straight toward our boat. The harbormaster at St. Bart’s gave us worse news: As all the local boats returned to his safe harbor, there was no room for our boat.

All night long on the unprotected outer edge of the harbor entrance, our boat pitched and yawed; our anchor held against the angering sea. We awoke at daybreak, and quickly prepared to motor back to home port, a hurricane hole on the French side of St. Maarten. Our route would cover sixteen knots over open sea, an ocean path slowly transforming into the monster that would hit us. But for now, we only had to contend with the outer bands of a wind called Omar. Rain squalls. Blasts of wind rushing to join the storm like soap suds circling a drain. Through the rain many miles south, we could see ghostly images, fleeting glimpses of the ancient volcano peaks on the islands of St. Kitts and Nevis, shrouded in swirling gray clouds.

The official warnings crackled over our boat’s radio, and despite eight years of French lessons, I couldn’t decipher the details of the storm’s movement. So we searched the FM band for a station that broadcast in English. We finally found a heavy Caribbean accent instructing islanders to take cover. “Schools are canceled,” the voice said. “Proceed to your designated hurricane assignments.” The announcer read an obituary, then he reassured his listeners with a song, “When He Comes in the Midst of the Storm.” The lyrics offered scant solace to a sailor’s ear: “When it all gets too rough, He will say ‘That’s enough.'” The announcer read a weather service update on the storm’s position and its strength, and told us when Omar was expected to pass over the island. Then he played another gospel song… “Tho my ship may be rocking and my sail may be torn, I shall wait in the eye of the storm.” Comforting.

Next selection was “The ship has no anchor and the storm has you drifting…hold on to your tiller and ride out the storm.” I held onto my tiller, and prepared for the worst.

As the last strains of “When the Big Wave Washes Us Away” faded into the wind, we knew we were touching the outer layer of a deadly monster.

After eight hours of smashing through six-foot swells, we made it to the hurricane hole, battened down the boat and headed up a small hill to seek shelter from the storm surge. When Omar finally hit us as a category 4 hurricane, I watched its fury from an open doorway on the lee side of the wind. Hours. That’s a story in itself.

I felt lucky to have escaped the open ocean, and the storm’s most deadly threat. But I did lose an old friend.

Joe T. Garcia had been a trusted sailing companion for a long time, on a dozen different boats, through scores of ports and squalls and storms. Weatherbeaten and frayed around the edges, Joe T. Garcia was a ball cap stitched with the name of the world’s greatest Tex-Mex restaurant. The cap, my trusty sunblock for a decade, still fit as snug as the first day we sailed.

As we absorbed the thrashing seas and 40-knot gusts from the outer bands of Omar, Joe T. Garcia held tight as a belt around my temples. Taking my turn at the helm, I held fast as our sloop’s diesel engine strained to push us through a raging squall, our prop nearly coming out of the water as the boat crested each big swell. Blinded by heavy rain, I relied on our compass to point into the gale, inching slowly toward the distant harbor.

I turned to glance at our wake. The wind caught Joe T. just right, and ripped it from my head. In an instant, Joe T. billowed like a parachute, flew past the aft rigging, and landed in our wake a dozen meters behind us. My first reaction was to dive in after Joe. But I knew that if I left the helm, both of us would be goners.

So I watched Joe T. float for a few seconds on a mountainous swell, and then disappear behind it. I knew that my waterlogged cap had begun its descent to join Davy Jones.

No matter where I sail, I know this: The sea is always in control.

At the outset of any journey, winds may be perfect. The waters smooth. The sea can lure you into its calm, lull you into relaxation. And when you let down your guard, the sea will swallow you.

We survived the storm, except for Joe T. Garcia, who lies with ten billion other victims beneath the waves. I guess I’m lucky I’m not among them. Yet.