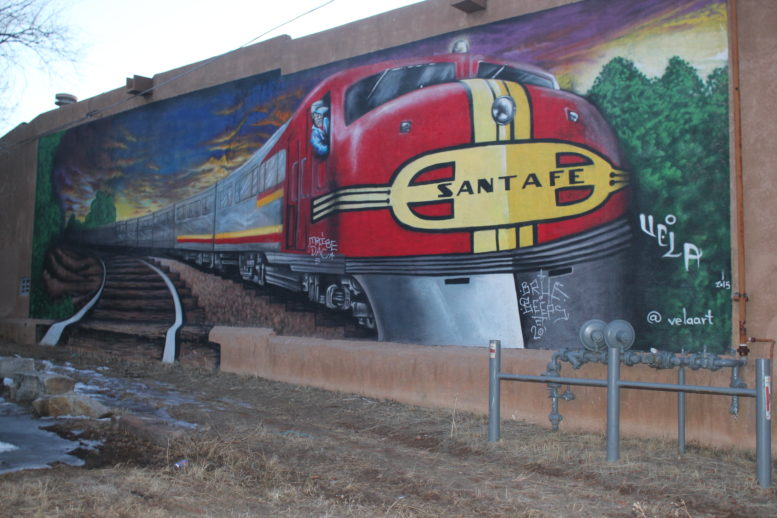 A solitary figure sat trackside on a bench outside the La Plata train depot. Approaching him I noticed he held a portable two-way radio.

“Three hours behind,” he said in halting speech. He didn’t seem concerned. “They’ll make up some time.”

His name was Dan, retired from the railroad. He told me he’s had some health issues, suffered a series of strokes, but he still shows up every day to greet the train, answer queries from passengers, help out where he can.

Since 1926 the Santa Fe Chief has been stopping in La Plata. Nowadays the station has no personnel, no ticket master, no station master. It’s just a whistle stop. “Most of the passengers who get off here are college students going to Kirksville,” Dan said. Now the train is called the Southwest Chief, Amtrak’s version of this historic ride from Chicago through Kansas City to Los Angeles.

Dan told me La Plata’s oldest industry—the railroad—is its newest industry. The whole town has embraced its railroad heritage and turned it into a tourist attraction.

La Plata is the Spanish word for silver. With two hours to kill before the Chief arrived, I walked into La Plata to check out the town’s new shine.

You can walk anywhere in La Plata, population barely into four digits. The downtown looks largely vacant, left barren by the Walmartization of rural America. Yet something big is happening here. I walked to the Depot Inn and Suites. Somewhere in the world, there may be a hotel more dedicated to the history of train travel, but I haven’t found it. Sure, every town with a caboose in its park has a railroad museum of sorts. But the Depot Inn is a railfan’s dream: a railroad museum with a hotel built around it. People come from all over the nation—by train—to stay here. I passed a pair of retired Amtrak mail cars packed with railroad displays, and a handcar near the entrance to the inn. The front desk looks like a train depot ticket counter, the lobby is a waiting room. Throughout the hotel, railroad memorabilia hang everywhere, even in the indoor pool area. But don’t assume the décor is all track and no treat. The suites are damn near luxurious. Hundreds of visitors from every corner of the world roll out of La Plata impressed with this little gem in the middle of America. There’s even a Train Watching Lookout Cabin, a covered shelter overlooking the railroad tracks, where folks listen to a radio scanner broadcasting conversations from approaching trains. Hotel guests can tune to the local railcam on their room’s cable TV. They never wait long, since the rails feel the rush of eighty trains per day.

I bade farewell to the solitary man with the halting speech on the bench with the two-way radio. “Good to see you’re keeping things moving, Dan!” I offered cheerfully. He struggled to smile. Later I learned he lost his battle to the strokes. Local folks and die-hard railfans will miss him. The thousands of people who make the pilgrimage to La Plata to see eighty trains per day will never realize they have one less set of ears to the tracks.