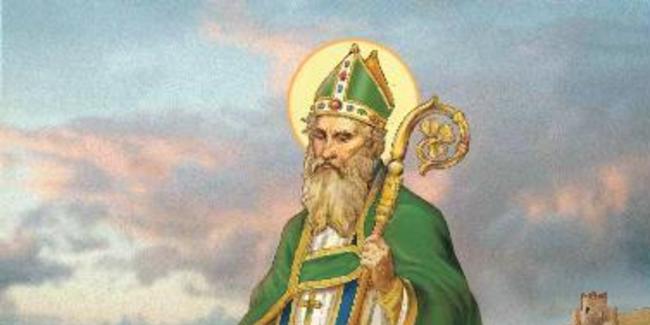 Researching for a novel about my Irish priest great grandfather, I’ve come face-to-face with the real St. Patrick. Two tales make him less caricature, more saintly.
Every Irish child knows the first story:
Patrick ascended Clough Patrick (the Irish Mount Sinai) and fasted for forty days, during which he encountered a scourge of demons–hideous birds. He rang a bell to scatter the demons, and the bell was heard throughout Ireland. The demon birds flew away and plunged into the sea. But even after driving out the demon birds, Patrick turned to wrestle with God to gain favor for the Irish. Patrick only descended the mountain when God had granted Patrick the favor of judging the Irish people on Judgment Day.
The second story, more obscure and less grandiose, has a bigger impact on your life: His scribes saved Roman classical literature from being lost forever.
Patrick combined Catholic teachings with Celtic and Druid folklore, because he knew the Irish love a great story. By the time of his death in 580 he had changed an island of illiterate pagan sacrificial warring tribes into literate, peaceful people.
In these same Dark Ages when St. Patrick shone the light of literacy to the Irish people, illiterate hordes laid waste to the dying remnants of the Roman Empire. The hordes torched everything, especially Roman literature and libraries.  The Celtic scribes of Ireland kept and preserved their copies of the great Roman classics—the only copies to survive the invasion. Virgil and Ovid. Petronius and Julius Caesar. Marcus Aurelius. Irish monks also saved the ancient Greek classics by copying the works of Homer and Plato, Aristotle and Socrates.
My great grandfather, Danny O’Dwyer the priest, knew the legacy of St. Patrick: Irish scribes are the only reason you can read the Roman classics today. Beannachtam na Femle Padraig.