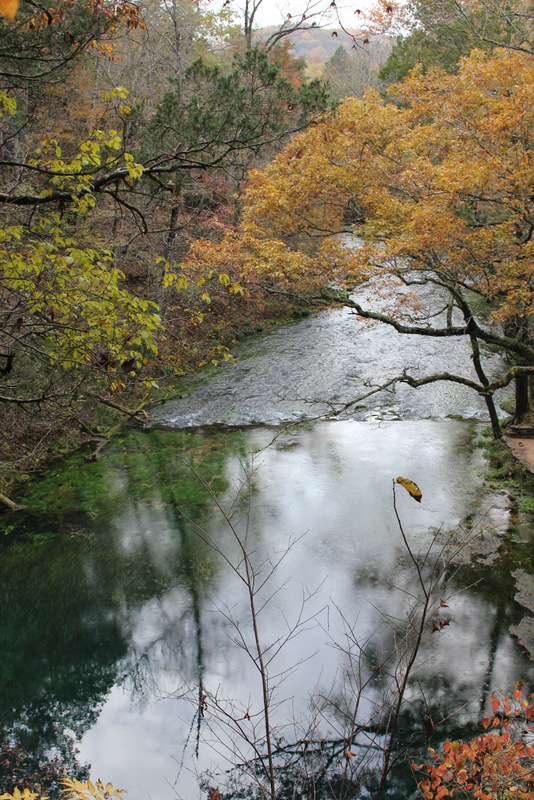 Most of these half million floaters miss Blue Spring, even though it’s only a quarter mile from the Current, an easy hike beside the spring’s gushing stream. Called Spring of the Summer Sky by native inhabitants, the water charges from deep in the ground, at the base of a high bluff that forms the back wall of a box canyon. Halfway up the bluff, a dead cedar trunk, taller and straighter than most, stands on the canyon wall like a spar on a clipper ship. In reality the tree is a diver, frozen in the beginning of her leap into the 300-foot-deep spring.

I paused to watch an otter fish in the spring waters, a cold aqua blue. Local fishermen hate otters, the way rival quarterbacks hate each other. It’s understandable, since otters have a definite advantage catching fish, unencumbered by limits or seasons or game wardens. Bipedal fishermen are resentful that after they’d painstakingly rendered otters extinct in Missouri and sold all their pelts to hat makers, state conservation folks reintroduced the otters to the rivers a few years back. Now the otters thrive, and the fish must spawn like crazy to supply enough otter fodder.

Still, there is relative harmony in this wondrous ecosystem. Except for one thing. Walking back to the Current River, I picked up enough beer cans and cigarette butts to fill a mesh trash bag. I know most people respect nature. But a few idiots express their freedom by jettisoning their trash in these pristine areas. They really work at it. They must procure the crap a dozen miles away, and transport it to this spot to deposit.