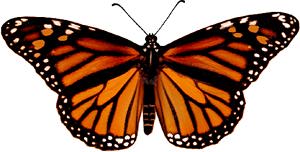 These regal creatures once numbered a billion, back when Edgar Winter first sang “Save the Planet.” Now their numbers are down to 30 million. Damn, Edgar, is anybody listening?

Down in the Mexico forest where the Monarchs winter, a recent census had some good news. The Monarch population numbers are up. According to the World Wildlife Fund, “the population of monarch butterflies that migrate from Canada and the US to Mexico for hibernation is on the rise! The area of forest occupied by hibernating monarch butterflies in Mexico has grown by 144% in relation to last year. Because we can’t count butterflies individually, we instead measure the area of forest they occupy during hibernation. But populations fluctuate, so it’s necessary to continue to address the threats they face. Climate change, forest degradation in Mexico where monarchs hibernate, and milkweed depletion along their migratory route all impact the species.” Over the next few weeks, millions of monarch butterflies will flutter through Missouri. But it’s too early to declare victory. According to an earlier environmental conservation nonprofit Xerxes Society annual Thanksgiving count, “the 2018 population of the California Monarch (which does not migrate) is down to 20,456 compared to 2017’s 148,000. That’s a one year, 86 percent decline.”