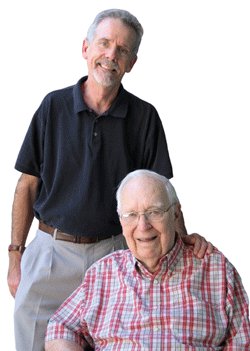 He said, John, in your life, there won’t be 10 people who you can really count on. That may be true for most of us.

But he was a teacher. And one of his most important lessons wasn’t something from a book or a classroom. He knew how to treat people. It was genuine.

When I decided to retire, Dad drove me to the state retirement office.

That’s not unusual. Over the course of our lives, BW served as my personal chauffeur on countless occasions. He’s probably driven me half a million miles. Church. Scouts. Vacations through 47 states. For years, I carpooled with him to his job at the Jefferson Building. Then I’d hike the rest of the way to school. He was the driver on my first date. He drove me to take my driver’s test, and then to get my driver’s license.

But this day was different. He was delivering his youngest child into retirement.

The staff greeted us cheerfully. Pleasant. Engaging. But they weren’t sure which of us needed assistance. That’s understandable. I was a dozen years away from normal retirement age. And Dad, maybe they thought he wanted to adjust his withholdings…

“I’m bringing my son to retire,” he announced, in a voice that caught the attention of nearby workers.  “John’s retiring. I can’t afford to,” he said. I really think he believed that.

Truthfully, there were days when he thought he might just quit. But he knew he’d miss the activity, and the people. You. So he kept working, and hugging, and wondering what it’s like to retire.

He never found out. And that’s okay, working and hugging right up to the end.

A ride they won’t forget