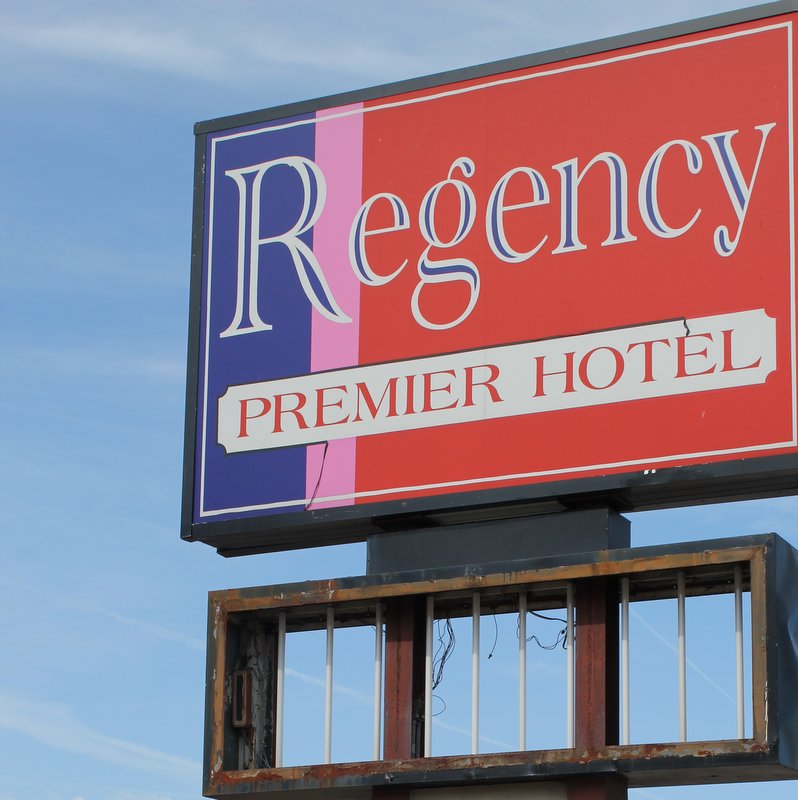 The demolition ran into a snag. A piece of equipment broke, and the wrecking of the old hotel stopped for a few days, leaving a solitary four-story turret rising above the rubble. Maybe it was an elevator shaft, I couldn’t tell. Its walls, exposed to the sun for the first time, were painted industrial colors. Drab green. Dull pink. Babyshit yellow. Around this turret a whole city block had been reduced to rubble, so the turret rose out of the debris like the concrete conning tower on a Lego Land submarine.

It’s hard to disagree that the old building had outlived its usefulness. Hell, even the Titanic would have been scrapped after a 40-year run. And in the end, the old Regency Premier Hotel in downtown Columbia succumbed to the infirmities of age. But what stories it could tell…

A few days later I returned to look at the manmade mountains of crumbled concrete and steel, and a thousand half-inch-thick rebars bulldozed into tangled spaghetti. I watched the wrecking crew with their big backhoe buckets the size of Volkswagens and their giant robotic jackhammers closing in on the last bastion of the old hotel, an underground bunker. In its heyday the bunker was a ballroom, a center for receptions and reunions where the only thing that flowed smoother than the liquor was the music. That ballroom is where a song called “The Columbia Stomp” was born.

The debris field offered no clue, but this spot was the closest thing to a riverboat in Columbia, Missouri. Unlike a riverboat, the hotel didn’t host gambling. At least not officially. But like all great riverboats, this old structure, stacked like a wedding cake, could probably accommodate a vice or two. Like an old boat, she had turned cranky and creaky, and just a bit scary. But the music still flowed, right up to the end.

Standing near me at the edge of the giant debris field, a man held a rolled-up blueprint in his fist. He saw my camera. “Getting a few last shots of the old hotel, huh?”

“Yeah. A lot of memories here. You with the demolition crew?”

He told me he’s a representative of the new hotel. “The Broadway,” he called it, under the flag of the Hilton Doubletree brand. He didn’t have to tell me; he knows he’s standing on a gold mine, in terms of the three most important rules of real estate. The new hotel is a slick and shiny buckle on Broadway for visitors from the Southeastern Conference, who can be tough customers when it comes to judging hospitality. Since this construction foreman had a look in his eyes that focused on the future, I didn’t bother him with nostalgia from the past.

But I’ll never forget that late late night when “The Columbia Stomp” was born. It happened in the wee hours of the morning, after a thousand ears in Jesse Hall had absorbed the last chords of the Blind Boone Ragtime Festival, and the hungry crowd lured the world’s greatest ragtime piano players to the Regency ballroom for an afterglow party. Terry Waldo sat down to play Jelly Roll Morton’s “Big Fat Ham,” and you could swear the riverboat was rockin’. Staying up past his bedtime, 15-year-old ragtime phenom Adam Swanson joined Terry for a duo. Maple Leaf maestro Mimi Blais showed off a pair of hot ditties. The legendary Carl Sonny Leyland laid down a burning boogie woogie. When he finished, somebody asked Sonny the name of the tune. “Well, heck,” Sonny said, “I don’t know. Let’s just call it ‘Columbia Stomp.'”

Even if you’re not familiar with the song, you can still see its very first performance, among Tom Warner’s YouTube videos. In Warner’s afterglow videos, you get a peek inside the old hotel, too. Or you can still get a glimpse of the Regency and its comfy rooms on the hotel’s Facebook page. Yes, as most folks find out sooner or later, a Facebook page seems as permanent as a tombstone.

The hotel knew its strengths. It marketed itself as “the perfect place for all MU visitors to stay. Whether there [sic] in town for MU sports, visiting the campus, or partying. The Regency is where the fun is.”

Built in 1971, and called the Downtowner Motor Inn, among other things, it bombarded Broadway with a big wall that blended Hollywood Squares with The Brady Bunch, its 103 rooms recessed behind riverboat railings. The old structure nearly faced the wrecking ball on its 30th birthday. A 2001 newspaper headline reported that the hotel was in “deplorable condition.” A court-appointed receiver for the hotel’s owner said the hotel’s condition “posed an immediate health and safety threat to guests and employees.” The hotel’s owner apparently disputed that claim. But whether the issue was safety or money, the hotel shut down four days before a Mizzou-Nebraska football game, causing scores of displaced visitors to see red.

The Regency was remodeled in 2003. One travel website touted the Regency as one of the “Romantic Hotels in Columbia, Missouri.” Among the amenities the website listed the Regency’s “granite lobby floors.”

But the honeymoon was too brief, at least in hotel years. In the court of public opinion, the Regency began taking more flak. Travel website blogs collected disparaging reviews. One Michigander who was proud of the party in Room 204 warned the next occupant: “shake the sheets.” Another visitor said it was a “Great hotel if you enjoy the smell of cat piss.”

Take these critiques with a grain of salt. After all, if potential vacationers heeded the online screams of horror from cruise ship malcontents, the cruise industry would run aground.

Some complaints probably were legitimate, like the report that “There was no parking in the hotel’s two parking lots. The hotel’s parking fills up with college club hoppers. If you want a spot, plan on waiting till after 1:30 am.” Well, the city nipped that problem in the bud with a new parking garage that can handle club hoppers and hotel guests alike.

Club hoppers. Hey, the hotel is surrounded by nightclubs. Would you really expect to get a quiet night’s sleep in the French Quarter?

Still, the “Do Not Disturb” crowd sounded off: “This is not the best hotel at all. However, if you want to drink all night long in the pool and hot tub they don’t care.”

Well, it’s only the Hot Tub from Hell if you’re not in it, cold beverage in your shriveled hand. More often than not, I saw the Regency’s luxury from that pool area, through late-night beer goggles, so it was easy to overlook a few frayed edges.

In a ritual that spanned two decades, a gaggle of Mizzou classmates from the Watergate era made an annual pilgrimage back to Columbia, invading the old hotel to fete an ever-increasing number of classmates and friends who passed on to the great beyond. We played golf during the day to raise money for their kids, and at night we walked to the Blue Note, and stumbled back to the Regency pool and toasted our growing list of casualties. And nobody cared whether the carpet had a stain, or the walls were too thin for the parties that went on til dawn.

Now, add the Regency to the list of bygones.

Progress gives Broadway a fine new boutique hotel with thicker walls and brand new carpets to stain, and more convenient parking next to a blossoming arts district. In time, Columbia’s transient population will dilute the memory of the old Regency. But in a weak moment of nostalgia, if you need to kick start your toe to tappin’, just Google The Columbia Stomp by Carl Sonny Leyland to uncover that video recorded in the late night afterglow of the basement ballroom in the old Regency Hotel. And a dozen blocks west down Broadway, in a quieter corner of this college town, John William Boone is smilin’.