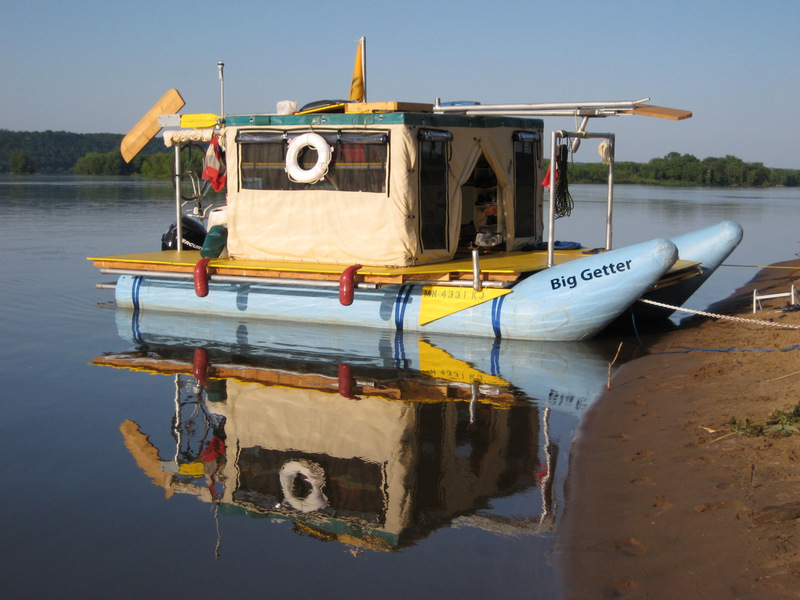 It isn’t a big raft. In terms of cubits, it’s a two-by-four. But it has a big back yard, a mile wide and 1800 miles long. And it became the summer palace for a big thinker who has no problem translating big thoughts into action.
Justus McLarty spent almost a year in the driest of dry docks, building his raft in a West Texas garage where the surrounding seas are subterranean black gold. That might seem like a problem, transporting a dream from tumbleweed country to the headwaters of America’s seminal waterway. But  Justus thinks big.
He had the luxury of summertime to complete the journey. His job goes dormant during the summer when his employer, Saturday Night Live, takes a production break.
Unlike SNL reruns, you never step in the same raft twice. So what kind of vessel would deliver him down the Mississippi?
The design bounced around Justus McClarty’s brain for years. From his own mental design, he began a trial and error process that produced a creature as unique as Mary Shelley’s monster or the Zilla of God. And at first glance, the boat looked nearly as freakish. The cabin is framed by welded aluminum joists, and fit with bright yellow plywood decking. Walls of waterproof nylon, canvas and clear plastic protect the passenger from the elements, and roll up during breezelesss swelter. The whole house sits atop two bulbous pontoons, blue as a Simpsons sky. The pontoons are tough rubber carcasses that sport a patchwork of repairs incurred in a previous life, when they took a thousand trips down the Colorado River.
The interior offers the rudimentary comforts of home. A stove. A sink. An ice box. Running water flows from refillable plastic tankards. Since interior space devotes to cooking, sleeping and storage, the living room sits atop the flat roof, furnished with matching folding lawn chairs. Two black water bags absorb heat from the sun, and wait patiently for the opportunity to hang from the side of the boat and spill their guts all over a grateful showeree. Toilets? There are two. One is a tiny portable throne aboard the craft. The other, well, it’s as big as the great outdoors. Take a shovel.
Two bunks are equipped with the single most important feature on the entire craft: mosquito netting. Seriously. Of all the perceived dangers on the Mighty Mississip, from barge tows the size of small towns, and felled trees floating like Mother Nature’s Minuteman missles, to being swallowed by a river turned backwards by an earthquake, or catfish worthy of a Peter Benchley read, the most immediate calamity happens every day at sundown, when a billion Draculas emerge from the shadows to suck your blood.
Other dangers may pose more risk. But they don’t cause you to slap yourself so much.
Mark Twain endowed us with more than literary masterpieces. He gave us a lasting river lexicon. Pilots have adopted a term for disciples of Twain who act on their fantasies of wild river adventure. Because the boat Justus built makes a cartoonish first impression, it attracted scorn from barge pilots. After all, these pilots are professionals, guiding billions of tons of commerce between the red and green buoys that mark the river’s navigable channel. They view primitive rafts the way you view a skateboard on a highway.
But they soon learned that the boat was not primitive. They saw it was solid and seaworthy. And its captain earned their tolerance, if not their respect. More important, Justus respected the big rigs, and stayed out of their way. In one radio conversation, Justus patiently answered a tow captain’s queries. “Yes, I have a motor.” And charts. And navigation experience. And lifesaving gear.
It was after this radio grilling that Justus overheard his inquisitor talking to another tow pilot. “He’s ok,” one pilot reassured the other. “He’s not a tom’nhuck.”
From the earliest idea stage, Justus was bombarded with the same question: “What will you name your boat?” He patiently fielded the same suggestions over and over. “Huck Too.” “Muddy Miss.” He even had an offer to sell the naming rights, but his goal had nothing to do with marketing or making money. He patiently awaited the name to come to him. And he was comfortable with the thought that the boat might not have a name until well downstream.
As with all good ideas and most newborns, the name arrived on its own schedule. In a conversation about the project, Justus recalls his grandfather saying, “Well, my Grandma Alexander always said the worst thing of all is to go through life with a great big wanter and a little bitty getter. So keep your getter bigger than your wanter.”
The Big Getter was born.
All summer long, river folks gravitated to this hydronomad perched on bulbous blue balloons. At a hundred landings, through the locks, along the river bluffs, from the decks of paddlewheel steamers, onlookers tempered their first impressions with one of two thoughts. “I’d never do that,” is a realistic response from those who rarely step out of their comfort zone. But a larger group felt a sense of envy.
I joined the crew on an impulse, and met up with the raft under the Arch.
No, we weren’t Tom’nHucks. But it was as close to Twain as you can get.

2 Comments on “Rafting the Mississippi”