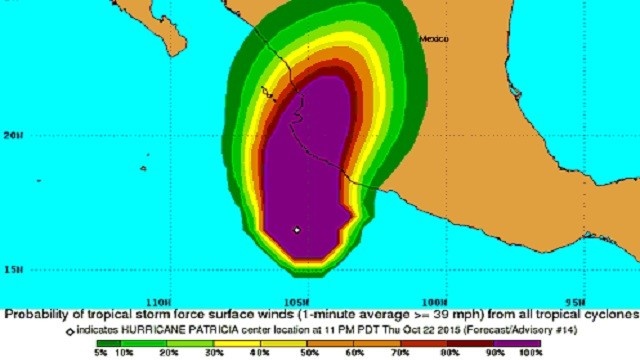 Scary spectre: “Stronger than Wilma, Katrina, Rita, Andrew. And it could become the strongest hurricane ever on the planet to make landfall when it hits tonight somewhere south of Puerto Vallarta.” Near its path, half a million people live or visit. Buses couldn’t hope to evacuate them in time. For about 4 hours, people in the direct path of this storm expected to experience “the equivalent of a Joplin EF5 tornado” with a 20-foot tsunami, meteorolgist Bill Karins warned.

Near landfall, the winds lessened to just under 200 mph, a nascar made of wind.

I remember the night before Katrina hit. And the nights we launched both Gulf Wars. Feelings of impending carnage. Patricia offered a similar gutwrench. For the fishing villages between Manzanillo and Puerto Vallarta, paradise may be lost. Power blackouts may hide the damage from the rest of the world for days. Mudslides could cut the roads to Guadalajara. The Mexican army might be forced to approach the devastation from the sea.

But the storm missed the cities. And there are no reports of fatalities.

The inland mountains sheared this monster. And the biggest casualty turns out to be Texas, under water.