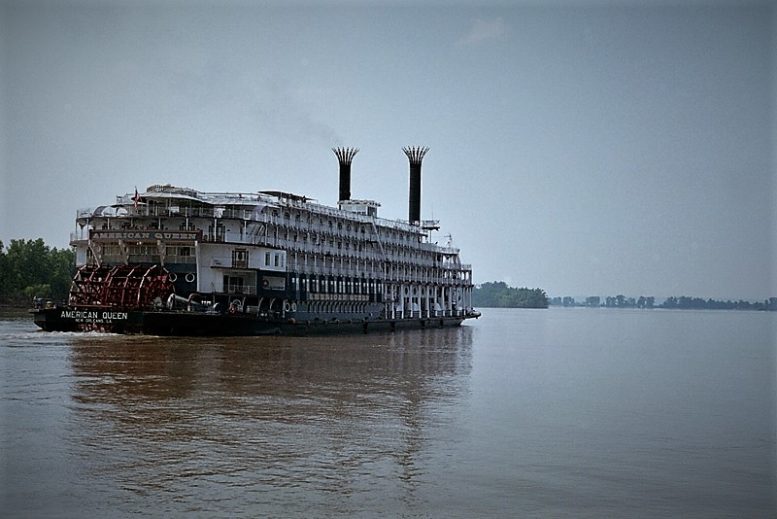 Around a sweeping bend we noticed thick black smoke that signaled one of the rarest sights on the river, at least nowadays. Sure enough, a paddlewheel steamer appeared, churning toward us. As the distance closed between our two craft, the steamer stopped dead in the water, the pilot thrusting his paddlewheel into forward and reverse to hold the American Queen’s position in the strong current. We drifted within spitting distance of the big steamer. The captain appeared on the bridge and shouted down to us. “Better move out of the channel. Big barge coming down around the bend behind you.” We knew that. Still, we thanked him for his courtesy. And we endured every one of the 200 passengers who appeared on the big steamer’s Texas Deck to observe our curious craft and to yell at us, “Get out of the way! Big barge coming!” We debated thanking them in the traditional sign language from small craft to these big floating wedding cakes. But mooning those octogenarian passengers after their well-intended advice seemed beneath crass.

As we drifted past the big boat, her pilot signaled the engineer to step on it, and the American Queen chugged up around the bend and out of sight. Minutes later, the big barge tow overtook us and passed without incident.