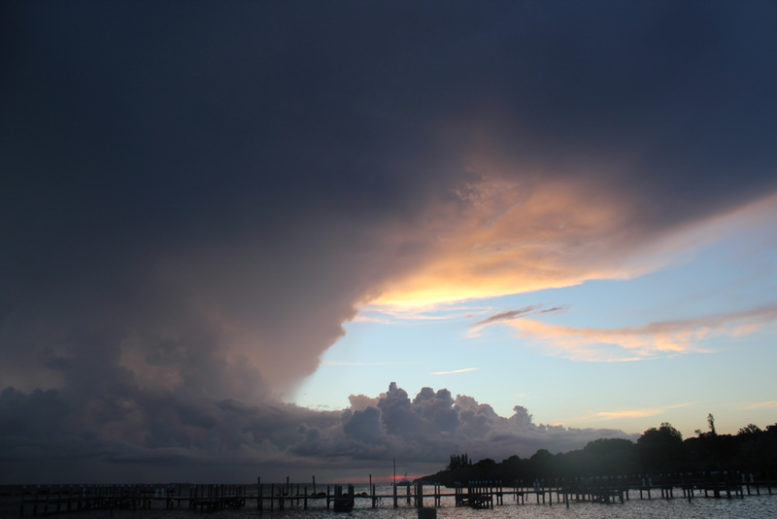 And now, no wiser, I found myself in another bad situation. I had no idea that the winds outside were approaching 200 miles an hour, a nascar made of wind. With debris smacking the outside of the cabin, I slunk down into the salon couch and pointed my headlamp into my sailing logbook. I found my first tropical storm.

Her name was Gamma, and she almost got us. She sprang from the underbelly of paradise, and slapped four sailors in the face. Repeatedly. For hours.

From the beginning of our journey, telltale signs foreshadowed that this might resemble a Joseph Conrad novel, a dark adventure in this land of the Mayan culture. The Brazilian-made single-engine plane that shuttled us from Belize City to our port of Placencia looked like a pelican, and we crammed into its belly like sardines with suitcases. The plane took off and flew south at near-dusk, hazy sea to port, mountains shrouded in rainclouds to starboard. The pilot cut a sharp circle and dived for his first stop, landing on a partly-paved, pothole-priviledged runway just long enough for us to stop and deposit some excess weight, mostly round brown pellets from our pantlegs. We took off quick and headed inland, to a national park game preserve right out of Daktari, and repeated the same dive to a dirt runway, where one relieved soul departed. Finally we reached Placencia, at the end of a peninsula on Belize’s southern coast.  There we boarded the Alexian, a 42′ catamaran. Docked beside us were nine British Airborne paratroopers, fresh from training in the jungles of Belize. Their weekend leave was over, their sailing finished. And now they were leaving for Afghanistan to cover for American troops who were being transferred to Iraq. They were headed into harm’s way.

2 Comments on “My First Tropical Storm”