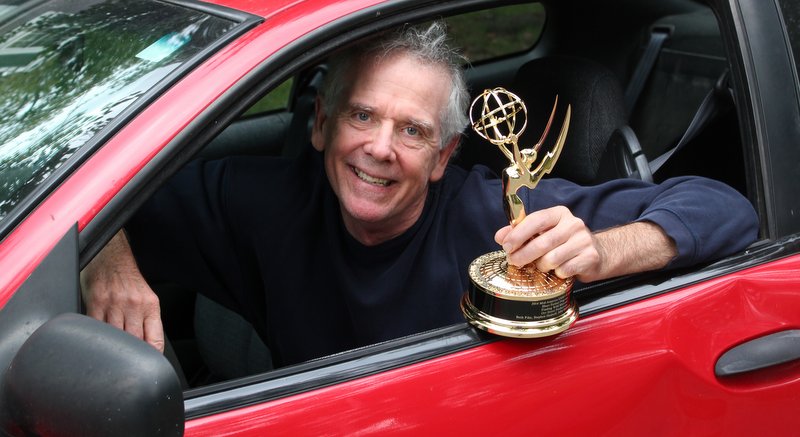 John Robinson and his car have driven every mile of every road on the Missouri state highway map. He’s written two books about their adventures, and now a web series highlighting their discoveries has won an Emmy.
Finding Wild Missouri captured the Emmy for Short Format Program, according to the National Academy of Television Arts and Sciences (NATAS), Mid-America Chapter. The Mid-America Emmys were announced September 27 in Kansas City.
John benefited from a seasoned film crew: Beth Pike and Stephen Hudnell produced the series…their third Emmy!
The Finding Wild Missouri series, developed by the Missouri Department of Conservation, follows John and his car, Erifnus Caitnop, throughout Missouri. The series encourages Missourians to discover the state’s natural treasures.
“I’m humbled to be a part of this award-winning peek into Missouri tourism,” Robinson said. “Obviously, Beth (producer/director) and Steve (videographer/editor) have the golden touch. Thanks to executive producer Peg Craft and the entire crew for their diligent trudgery through Missouri’s back roads and backwoods,” Robinson said. “Most of all, thanks to the women and men of the Missouri Department of Conservation for being among the world’s foremost stewards of our air, water, land and wildlife.”
Robinson wrote A Road Trip Into America’s Hidden Heart in 2012, and Coastal Missouri in 2013.
Watch the latest episode of the award-winning series here: