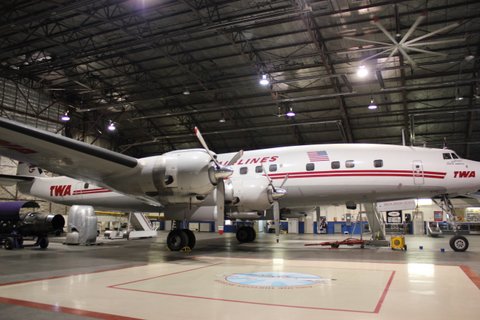 Connie stays across the river from downtown Kansas City at the old municipal airport. She’s known more formally as a Lockheed Constellation, the airline workhorse of the 1950s. If you saw her, you’d instantly recognize the plane, with her curvy porpoise fuselage, three tailfins and four propellers. She’s the poster plane for the last great American airline company, Howard Hughes’ TWA.

The Save A Connie Foundation is in Hangar 9 at the old KC Municipal Airport– now called the Charles B. Wheeler Memorial Airport. The airport itself is a relic, replaced by the larger, safer Kansas City International Airport. Tucked into a tight riverbend beneath the watchful eyes of the Kansas City skyline, this airport museum gets overlooked by just about everybody, one of Kansas City’s best-kept secrets.

I was looking forward to climbing aboard Connie. Until dumb struck.

On the day we visited the old airport, foul weather had grounded flights. Forecasters were predicting a foot of snow behind a cold front that was slowly pushing through. So Erifnus delivered me through the howling wind and rain, into the parking lot, excited to savor this museum.

But on this blustery afternoon as I left Erifnus to see the alluring Connie, I realized I’d just locked her doors with the keys in her ignition.

I stood, numb, frozen–not from the wind and rain that pelted me, but from my own stupidity.

Erifnus Caitnop, doesn’t deserve such rude neglect. Granted, she has only half the propellers of the shapely Connie, and those propellers–a radiator fan and a heater fan—are hidden from view. But she’s performed nearly flawlessly as my Trigger, my Lassie and Old Faithful all rolled into 140 horsepower. She is my one constant companion along my journey across every mile of every road on Missouri’s Highway map, my trusty steed for 14 years…281,000 miles and counting.

But on this day, she sat protecting my keys from the wind and the rain. And me.

I must confess that this is not the first time I’ve locked the keys in this car.

In fact, I’ve performed this stupid feat twice in one day.

She was new and sleek and shiny, and we were still getting used to the road together when it happened. The first time was like any time you’ve done it. And don’t tell me you haven’t done it.

The second time, hours later at a Casey’s convenience store in tiny Madison, Missouri, I filled her tank with the corn-laced liquor she loves. I hung the hose on the gas pump and returned to open the car door.

It only soothed my ego a tiny bit when the locksmith arrived an hour later, and told me, “Yeah, these cars have a protective locking system. So when you leave the keys in the ignition and shut the door, it automatically locks. Keeps thieves from hopping in your car.”

I promised Erifnus I’d never again treat her with such neglect.

But over the years, as with most partnerships, there were stressful moments. Most were caused by driver error. Spinouts. Warning tickets. Getting stuck in mud. Sliding sideways under downed power lines. Stuff like that.

In the windswept parking lot of Hangar 9, with a blizzard on its way, I regained my composure, and entered the museum hangar, confessing what I’d done to the friendly folks inside. They were extremely helpful, being a collection of pilots and mechanics and classic airplane lovers.

But try as we did, we couldn’t make a coat hanger unlock my car.

So after a delightful tour of the museum, and a walk down the aisle of that classic old aircraft with its three tailfins and four engines and porpoise-shaped fuselage–and a hundred dollars or so for a locksmith–I thanked my hosts, tucked my tailfin in the driver’s seat and drove home.