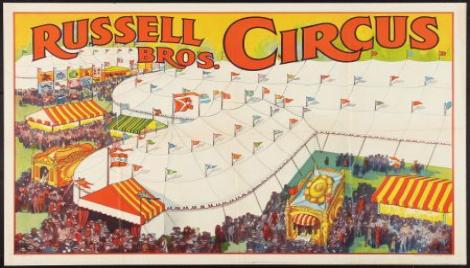 In 1933, the circus came to town.  It stayed for a dozen years, or at least it rested in Rolla, where the Russell Brothers Circus plopped and hunkered for the winter. And each spring, the major three-ring extravaganza rehearsed in the fields around the old Civil War Fort Wyman, entertaining townsfolk as they gathered just north of Lions Club Park.  Then, as cheers echoed through the park, the circus loaded its tents and elephants and performers into forty brightly painted trucks, and headed on the road.

Russell Brothers Circus was a new breed of circus, abandoning the traditional railroad travel for the ever-expanding highway system. A circus that traveled on the highway had certain mobility tradeoffs.  You could get to smaller towns away from the railroad. But the circus that traveled by rail was considered a higher caliber, a notch above the road trippers, at least in the minds of the folks who waited for the train whistle that signaled the elephants and lions and tigers and top hats and tails and tutus were on the way.  The Russell Brothers Circus is one of only a handful of circuses that survive.