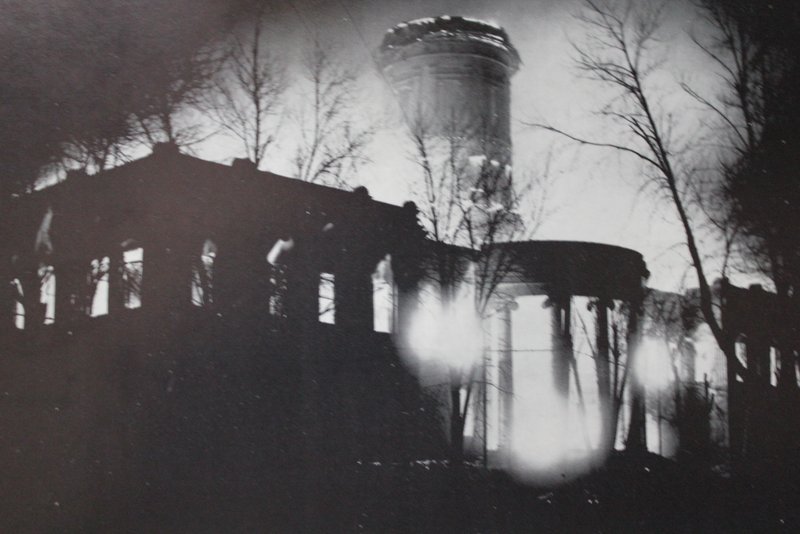 We had a busy day. Missouri Transit delivered my grand kids in time for us to scamper across the bridge to eat breakfast at Tremain’s. We watched passengers arrive on an Ozark Airlines DC-3, then retraced our route, past the Bridge Drive In, where Bullitt and Bonnie and Clyde shared the marquee. No time to stop at Randazzo’s, because the light was green, so we crossed the bridge. A right turn at Little Nell’s put us on a course to Hall’s soda fountain and a phosphate, before we fueled at Johnny’s Sinclair, since Derby looked like it was being robbed. Gibson’s Discount Center had my littlest one’s prescription ready, and we cut through Schellridge to head down Missouri Boulevard, past Ken’s Pizza and Tony’s and Highway 50 Drive In. As we drove past Veit’s and Bi-Rite and Bowl Awhile, they begged me to tell them again about folks jumping off the Grand Glaize Bridge.

We drove past Schanzmeyer Ford and Montgomery Ward, Voss Market, Koo Koo and King’s, where they know phones await at each booth. “Stop! Stop!” they pleaded. But we kept going, up the hill, around the corner past the historic old Lohman House and Still Hospital. “Oscar’s Steak House’ll have ribs for lunch,” I offered. No takers. A left at Esser’s pointed us toward the Seven Hills rollercoaster. We made our way to Daisy Delight, where I ate a grilled ham and cheese the size of a Tolstoy novel. We rolled down Schott Road and delivered an invoice to Rip’s Mor-E-O Lodge, and doubled back to town.

The kids inhaled a treat under the golden arches of Landwehr Dairy, since I knew they’d get nervous at the antiseptic smell by the elevators outside Tremain’s in the Medical Arts Building. Downtown we picked up paintbrushes at Bartlett’s, Jack & Jill jumpers, hats at Herman’s. The girls found something fun from the Bermuda Shop, something scary from the Reliable. Ten cent toys from Woolworth and Spoolies from S.S. Kress. Fresh fruit at Mercurio’s, fake fruit at Sir Roberts, Ltd. Turtles at Mavrakos. I rewarded them with a plate of french fries at Adcock’s, and they steeled themselves to peek into the Brass Rail. “It’s not as scary as the Rathskeller,” I assured them, “or Blackie’s Nite-After-Nite. That one’s in the Mill Bottom, across from the roundhouse and Scruggs Guhleman, which is next to Oscar Hoffmeyer’s.” They didn’t care.

They did need a haircut. So we drove uptown to the White House, and while they got shorn, I picked up a slide rule and a church key from Madison Hardware. Yikes…just enough time to hustle the kids past S&M Sports and Taco Tico and the Purple Shoppe and the stately old Central Hotel, down to the Capitol Theater to watch Wait Until Dark, and an apres-movie pizza at Arris, the best pizza in Missouri. They stayed close to me all the way to the Melody Shop to pick up a half dozen 45s. They greeted the old man in the window at Schleer Brothers Hardware, and we walked past Czarlinsky’s and C Gordon Price. Then I sprung my surprise. “Hop in the car.” I drove them past Pauline’s Frost Stop, up the hill through Holts Summit, toward the 2000-foot tower that helps feed America’s emergent babysitter. “You’re gonna be on Showtime, and Curly Houser’s gonna turn you upside down.” Ah, technology.

We finished as we always did, with ice cream at Central Dairy. “Some things never change,” I thought. Then I awoke, shook off that dream, and delivered the grand kids where they wanted to go: Wal Mart and the mall.

Maybe you can’t go home…but you can keep home in your heart.

John Robinson will be at the Missouri River Regional Library on Tuesday, September 10 at 7 pm to talk about his book, A Road Trip Into America’s Hidden Heart.