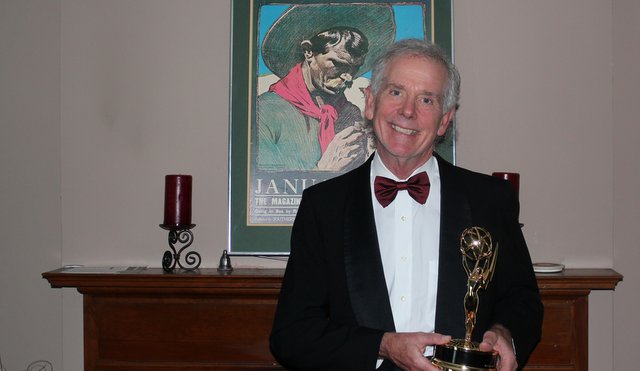 After speaking to the Missouri Press Association Convention last month, I let my hair down at Columbia’s Roots & Blues festival, before hopping in Erifnus, my car, for a whirlwind trip to Kansas City. There, our film crew won an Emmy for a web series based on my travels.
Finding Wild Missouri won the Emmy for Short Format Program, from the National Academy of Television Arts and Sciences (NATAS), Mid-America Chapter.
Our series, produced by the Missouri Department of Conservation, encourages Missourians to discover the state’s natural treasures.
Honestly, winning an Emmy seems surreal, since I’ve focused most of my labors on writing books. But our film crew—Beth, Steve, Peg, Neil and Derryck—are pros with a golden touch.
Beyond all the hoopla, our crew knows this: The women and men of the Missouri Department of Conservation are the world’s foremost stewards of our air, water, land and wildlife.
Anyway, returning home, Cheryl put the Emmy on the mantel, and we went back to the Roots & Blues Festival for more music therapy.
Next day, after a meeting with a Mizzou J-School prof, I ran into one of my heroes. I’d never met William Least Heat Moon, but on this day I bumped into him on the street.
“Big fan,” I told him.
But more important to both of us, he confirmed that he and my dear departed uncle Dan Drake—one of the most creative people on the planet—were runnin’ buddies during college at Mizzou. We lamented Dan’s passing, and resolved to toast him with a libation or two sometime down the road.
It was a good weekend.

Watch the latest episode of the award-winning series here: