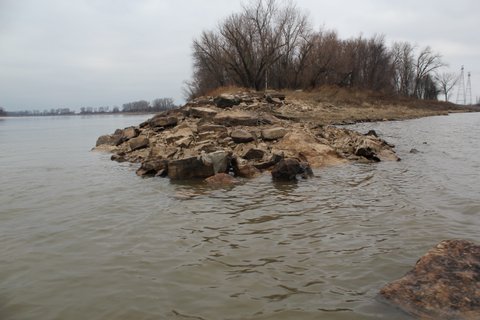 “Mighty Confluence” has been nominated for an Emmy. It’s the first of a series of short films following Erifnus and me as we drive every mile of every road on the Missouri state highway map.

The nominated episode, one of three nominees for the Mid-America Emmy award for Short Format Program, is part of the Finding Wild Missouri video series produced by the Missouri Department of Conservation The series encourages Missourians to discover the state’s natural treasures–in this case, the confluence of the Missouri and Mississippi rivers.

The Mid America Emmys will be announced September 27 in Kansas City.

I’m humbled and excited to be a part of the team nominated for this honor. Thanks to producer/director Beth Pike, videographer/editor Steve Hudnell, executive producer Peg Craft and the entire crew for their diligent trudgery through Missouri’s back roads and backwoods. Most of all, thanks to the women and men of the Missouri Department of Conservation for being among the world’s foremost stewards of our air, water, land and wildlife.