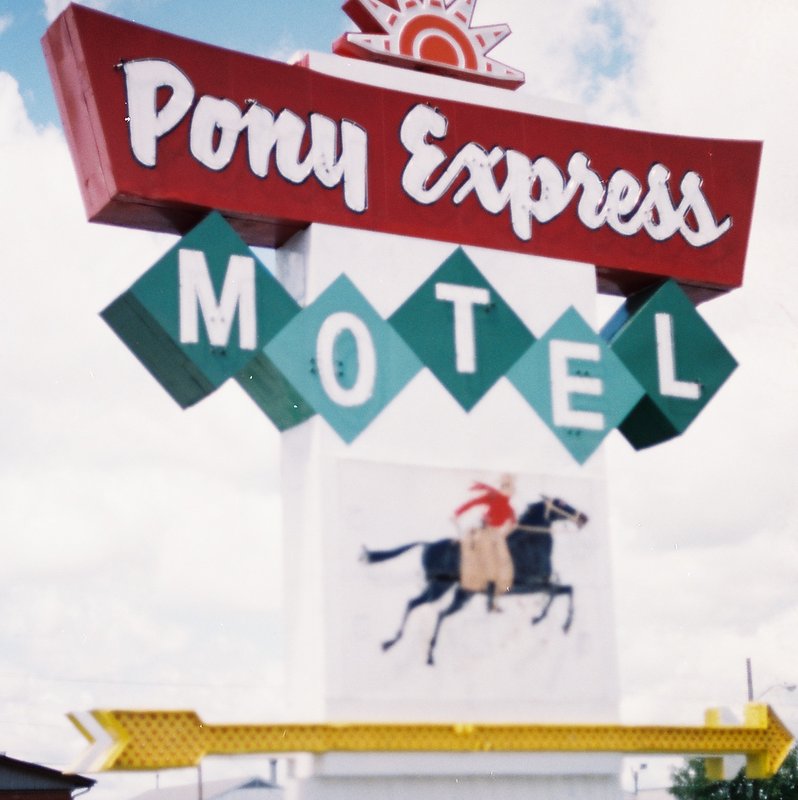 The arrow smashed into his jaw, knocking out five teeth. He kept riding. It was his second wound, delivered from his pursuers. He had jerked the first arrow out of his shoulder, and kept riding. Now Pony Bob’s mouth had an extra opening, and his shoulder was in pain. But he was young—a teenager—and his horse was fast. He rode for the Pony Express. Hey, this job wasn’t as romantic as I thought. Probably couldn’t find many people today who would work in those conditions.

I walked outside, and saluted an old friend, clinging to a galloping horse stuck atop a ten-foot pole. A giant neon arrow underscores the horse’s hooves, and aims at the museum stables. Appropriate, I thought. It’s the Pony Express Motel neon sign, lovingly transplanted to the museum’s parking lot. Years ago, in one of my first jobs—as a surveyor for the highway department—I stayed many nights bathed in the glow of that old sign.

I walked up the hill to the Patee House, where the Pony Express idea was hatched. Now it’s a museum but it was called the World Hotel and Epileptic Sanitarium when the widow of America’s most notorious outlaw was interviewed there, a block from the spot where Robert Ford’s bullet had lodged on the previous day. I shivered at the St. Jo police exhibit of actual murder weapons, including a drill with hair and skin still wrapped around it.