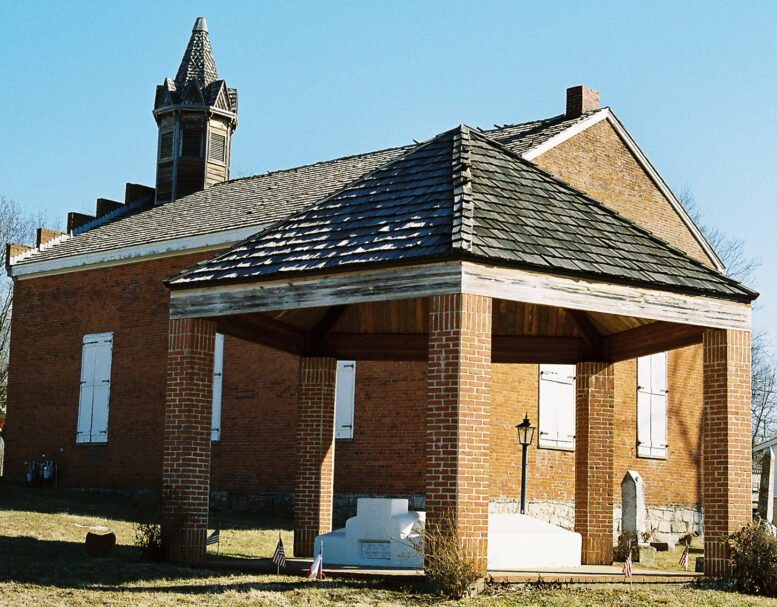 When Europeans came to Missouri, it didn’t take long for Moses to play a pivotal role. Like the man for whom he was named, this Moses was a leader, and the grandfather of a modern day version of the promised land.

Moses Austin fathered Stephen F. Austin, who fathered Texas. But unlike his son, Moses spent most of his career as a successful businessman, mining lead from the hills between Ste. Genevieve and Potosi. In 1934, long after Moses died, and Stephen F. died, and Texas became obnoxious, some Texans tried to steal Moses’ body. Their goal was to reunite gramps with Steve in Austin. Moses had been laid to rest at a Potosi cemetery in the shadow of the county courthouse. The Texans’ heist of Moses failed.  And any subsequent attempts will require the removal of a slab the size of a back yard patio on top of Moses’ grave.  He’s still there, under it, in Potosi.

That wasn’t the last time folks poured extra concrete on top of a body to keep it in the ground.

For 95 years, Ella Ewing has rested peacefully in a cemetery next to Harmony Grove Baptist Church, in a remote spot in remote Scotland County. All 8 feet 4 of her. At the time, she was the tallest woman in the world. Best I can tell, she still holds the record, though her name rarely shows up on anybody’s official list. It wasn’t her choice to be that tall, but it made her famous. Reluctantly, she finally realized that she could capitalize on her height, and she joined the circus to make a living.  She knew the wages of fame, so when her 10 pallbearers lowered her extended cab casket into the ground, her father had grave diggers pour extra concrete over the vault to keep body snatchers from extracting her. She was afeared entrepreneurs would reintroduce her skeleton to the carnival sideshows. That’s not the last time Missourians had to protect their heritage from carneys.

Granted, nobody stole Missouri’s most infamous dead body. Jesse James’ mother Zerelda made sure of that. When he died in 1882, she had him interred next to her Kearney, Missouri house, so she could chase off any body snatchers. Strong-willed and ornery by most accounts, Zee James raised some hell raisers.  But she knew it wasn’t their fault. Other folks made ’em mean. Their dad was hanged by feds, and Zee cut him down, saved his life. The Union later threw her in prison, accusing her of being a spy. And for incessant railway transgressions committed by two of her sons, the Pinkertons firebombed her house, blowing off her hand and killing her youngest boy. All that ruckus caused young Jesse to shuck his Holy Bible and take up swearing, a practice at which he excelled.  He even coined new swear words like dingus.

Zee James charged a quarter apiece for tourists to view Jesse’s grave. When she died, Jesse was moved to Mount Olivet Cemetery in Kearney, Missouri, where he rests next to Zee James the younger (Jesse married his first cousin, who was named after his mother). The original tombstone on Jesse’s first grave has been chipped away by grave stone robbers, sometimes also called tourists.

So far, nobody has succeeded in stealing Jesse’s body from its new resting place, either. Maybe that’s because few true believers think Jesse James is really dead. Elvis syndrome. A few years back, they dug Jesse up, just to lay the rumors to rest. Turns out they are his bones, all right. And within minutes, people started chipping pieces off his headstone, there in the cemetery in Kearney, Missouri.

Jesse’s brother Frank requested cremation because he feared grave robbers would enlist his bones in a carnival sideshow. In an ironic twist, the bank robber’s ashes hid in a bank vault until his wife died in 1944. Now both of their remains lie in the Hill Park Cemetery in Independence.

Frank always respected dead bodies. He is rumored to have participated in the return of one corpse. It happened during the Civil War at the Battle of Wilson’s Creek near Springfield. During that battle, General Nathaniel Lyon became the first Union general killed in the War Between the States. Not particularly loved by his troops, Lyon’s body was left on the battlefield when the Union withdrew to Springfield.  The confederates recovered the body, and took it to the Ray House, which served as a makeshift hospital and morgue. They cleaned General Lyon and prepared the body for burial. They sent a messenger to the Union forces, who agreed to accept the body of their fallen leader. A teamster wagon caught up with the retreating Union forces and delivered the corpse. One of the teamsters was Frank James, so the story goes.