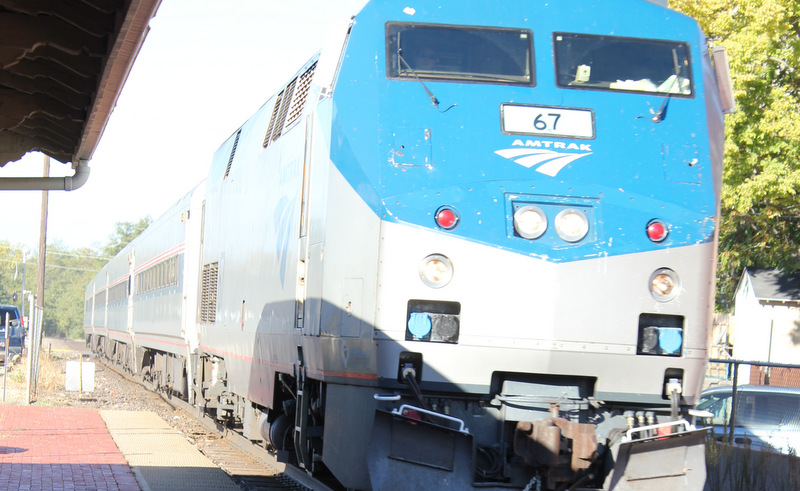 Dogbutt reminded me about the time we drove to Centralia, Illinois, and jumped aboard the City of New Orleans, headed south. At Memphis, a fraternity joined the trip and settled in the club car for a night of partyin’ and bobbin’ in their coolers for cold Buds.
“The conductor came through our car,” Dogbutt recalled. “Said they was lookin’ fer somebody to play the piano back in the club car, seein’ as how the frat boys was a yodelin’ and wantin’ to howl.”
Well, shoot, I knew the chords to Wooly Bully, having learned them years ago from some vagabond troubadour at Mojo’s. Or was it Park Place? I don’t remember. Anyway, I volunteered. Dogbutt broke out his fiddle. We had a rollicking time, drinkin’ and hollerin’ out songs. We had them Memphians singin’ the official Mizzou love song: “Hey Hey Baby/I Wanna Know/Will You Be My Girl?”
They put a tip jar on the piano, and by the end o’ the night, that tip jar had a dollar in it, by God, which, as far as Dogbutt was concerned, made him a professional, although he’s not gonna claim the dollar on his taxes seein’ as how it’s cash. When the last frat boy had fallen, we wandered up the narrow aisle through a gauntlet of snores back to our seats, where I soon fell asleep in a semi-recumbent position.
When I awoke, it was hot and stuffy, and the dead-calm air was tainted with the peculiar odor that happens when a thousand people gets stuffed into a long skinny aluminum cannelloni.
“We wasn’t moving,” Dogbutt was freakin’ out.
The train had broke down, and we were on a siding outside Grenada, Mississippi, waiting for a repair train to reach us and restore power so the electric toilets would flush again and the air conditioner would come back on and blow away the urine smell. Well, the club car snack bar was closed ’cause they had no electricity to microwave cellophane sandwich packages, or take your debit card, so I opened my cooler, and all I had was beer, so we drank beer for breakfast and then I realized that the toilets were all shut down and so it got kinda miserable with no place to go.
“It was Mississippi hot,” Dogbutt reminded me, “and sticky as a Tennessee Williams stage play.”
“But even in all that misery,” Dogbutt laughed, “we was on a damn train, fer godsakes. We coulda got off any time to take a whiz. Never mind that we was surrounded by swamp, and I seen a dozen unmistakable bumps with alligator eyes poking just above the water.”
We sat there for a couple hours, sweating buckets while our New Orleans time slipped away like Willie Nelson promised it would. The train ended up breaking down two more times, and when it finally rolled into New Orleans, we’d been cheated outta ’bout 20 percent of our weekend.
So we made up for lost time. We found a corner on Royal Street, and Dogbutt got out his fiddle. We sang Street Corner Serenade until the fiddle case was full o’ dollar bills. I don’t guess Dogbutt ever claimed that cash either, since we drank it away that night. Laissez les bon temps rouler!