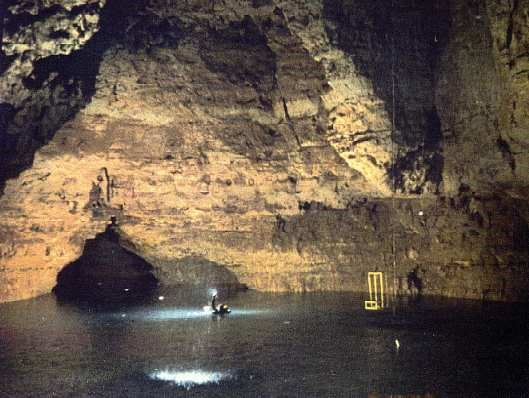 Devil’s Well is a big stomach, says one of America’s preeminent geologist-explorers. It’s Mother Nature’s idea of an indoor pool, except that it’s cold and dark and underground and scary as hell, hence the name. It is the world’s most dramatic peek into an underground river, a hundred feet straight down through a hole no wider than a backyard trampoline.

Before the Devil relinquished this well to the National Park Service, visitors could descend into the stomach, er, sinkhole in a bosun’s chair. It was a ride much like the worm experiences when dangled from a fish hook, although the conclusion is less digestive.

One hot afternoon we drove a couple of frog hops from Akers Ferry on the Current River to walk the steep switchback trail down into the sinkhole that drains into Devil’s Well. The sinkhole’s dimensions are such that it would make a perfect sheath for a small tornado, if Satan wanted to store one here. The hole narrows to the size of an inverted forest tower, descending to a platform where we peered over a ledge through a hole that could easily become plugged by an elephant if it fell from the sky into this tiny vortex. A hundred feet below the hole is the water. The cavern is the exact size and circumference of the Astrodome, best I can tell. So this hole is the world’s first domed sports facility.

Thanks to well-hung electric lights, we saw the cavern and its pool, which would be the eighth wonder of the world except that it already has a higher ranking as the seventh wonder of Shannon County.