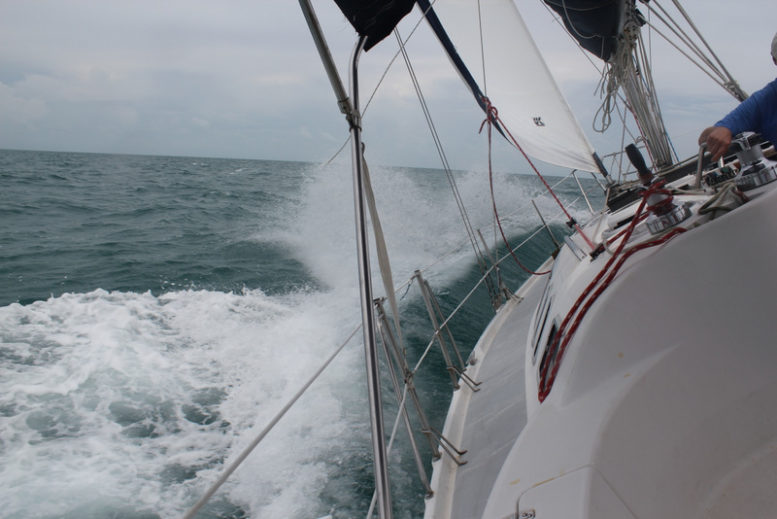 First night, Tropical Storm Gordon formed over our heads. Next day, Gordon’s outer bands lashed us as we danced on the edge of the storm.

This passage reminded me of a race against time ten years ago:

We awoke at daybreak, and quickly prepared to motor back to home port, a hurricane hole on the French side of Saint-Martin. Our route would cover sixteen knots over open sea, an ocean path slowly transforming into the monster that would hit us. But for now, we only had to contend with the outer bands of the wind called Omar. Rain squalls. Blasts of wind rushing to join the storm like soap suds circling a drain.Through the rain many miles south, we could see ghostly images, fleeting glimpses of the ancient volcano peaks on the islands of Saint Kitts and Nevis, shrouded in swirling gray clouds.
The official warnings crackled over our boat’s radio, and despite eight years of French lessons, I couldn’t decipher the details of the storm’s movement. So we searched the FM band for a station that broadcast in English. We finally found a heavy Caribbean accent instructing islanders to take cover. “Schools are canceled,” the voice said. “Proceed to your designated hurricane assignments.” In a deep baritone voice the announcer read an obituary, then he reassured his listeners by playing a gospel recording, “When He Comes in the Midst of the Storm.”

–from Sailing With The Scotch Brothers