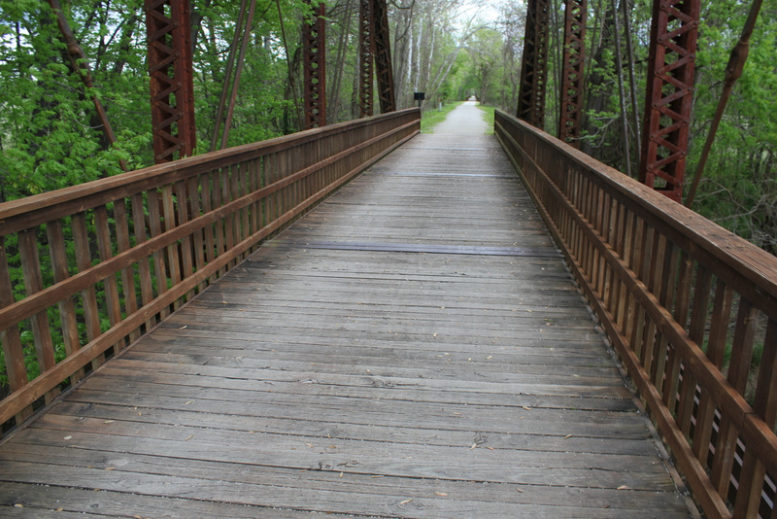 Fresh cut flowers sprout from vases atop linen tablecloths. Real silver serves up the best fare this side of the Savoy. The attention to detail befits royalty.  In movies, mysteries and memories, the railroad dining car is the centerpiece to nostalgia.

The last rolling meal was digested long before they ripped up the rails to the old MKT Railroad between Clinton and St. Charles. Yet travelers along the KATY still can find a great meal.

If you enjoy 100% pure angus beef, you’ll notice plenty nuzzling next to the world’s longest skinniest state park. Of course, the beef is still on the hoof.  Same thing for venison and buffalo, in herds outnumbering anything you normally see from the highway. Wild turkey trot in flocks of a dozen or more. Green goslings struggle to keep up with their proud parents, a pair of Canada Geese. And one by one, rabbits flush from hiding, hopping down the KATY Trail.

It’s a cyclist’s safari. Wild game use the trail for the same reasons we do.  It’s a great way to travel. The animals know they’re safe, not so much because hunting is prohibited, but because the average cyclist is in no position to snag a squirrel, or strap a bison or a buck on his back.

Nope, no big game hunters here. Bipedal fauna visit the trail to exercise, or scour the banks for morels. They find ‘em, too, and walk home with bread sacks brimming, if conditions are right, and eyes are keen.

Anyway, a cyclist needn’t go hungry along the trail. During my recent five-day trek from Clinton to St. Charles, I spotted 67 places to buy food.  Some were restaurants, some were general stores. Some were closed for one reason or another. A few stand out in my memory:

A thunderstorm chased my nephew Tim and I into Sedalia on the first evening. We ducked out of the first fat raindrops into the historic Bothwell Hotel, where hospitality shines. The owners lovingly restored the eighty-year-old building, right down to the original bathroom tiles. No less impressive, the hotel’s Del Amici restaurant had perfected chicken marsala. But Del Amici bit the dust. Not to worry, the Ivory Grille has roosted in the Bothwell, serving up ribeyes and strips, surf and turf and sea scallops and gooey butter cake, that St. Louis creation.

Next morning, it was a long, steady climb out of Sedalia, through a cool misty wind. We passed through thirteen miles of the greenest rolling farmland in Missouri, beneath canopies of budding hardwoods, past bank full streams pushing toward the Lamine River. We reached a peak at Pilot Grove, and stopped to rest and refuel. An hour later, bolstered at Becky’s Burger & Cone by chunks of golden fried catfish, we began the thirteen mile descent into Boonville. There, we crossed the Big Muddy, and followed it to Rocheport, where we joined family for a feast at Les Bourgeois that included halibut in lobster sauce.

Day three was a 63-mile endurance test. The reward? At the end of our ride, we had our choice between two great time-tested eateries. SOB (Steedman’s Only Bar) features a pool table, and Betty and Bernie, the latter a retired Navy cook who produces the best steak in North America. Five and a half miles down the road in Portland, at the end of our day’s ride, our wives joined us at the old Riverfront Bar & Grill. The catfish and fried chicken looked so good, we ate again.

The next day provided a special treat. Someday, if you haven’t already, you’ll discover Augusta. From your first Rocket Root Beer at the Augusta Brewing Company to the morning meal at the Brick House Bed & Breakfast, the town proves why it’s a paradise for vintners, shoppers, historians, and sore cyclists.

Distant whistles from a train across the river may remind you of a time when meals were served to the rhythm of the rails. As I sat in a hot tub in Augusta, I reflected on 67 places to eat…some of them restaurants, some of them general stores, some of them great.