Connie stays across the river from downtown Kansas City at the old municipal airport. She’s known more formally as a Lockheed Constellation, the airline workhorse of the 1950s. If you saw her, you’d instantly recognize the plane, with her curvy porpoise fuselage, three tail fins and four 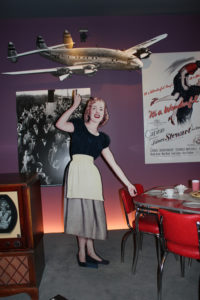 propellers. She’s the poster plane for the last great American airline company, Howard Hughes’s TWA.
The Save A Connie Foundation is in Hangar 9 at the old Kansas City Municipal Airport— now called the Charles B. Wheeler Memorial Airport. The airport itself is a relic, replaced by the larger, safer Kansas City International Airport. Tucked into a tight river bend beneath the watchful eyes of the Kansas City skyline, this airport museum gets overlooked by just about everybody, one of Kansas City’s best-kept secrets.

0 Comments on “Connie, the KC Cutie”