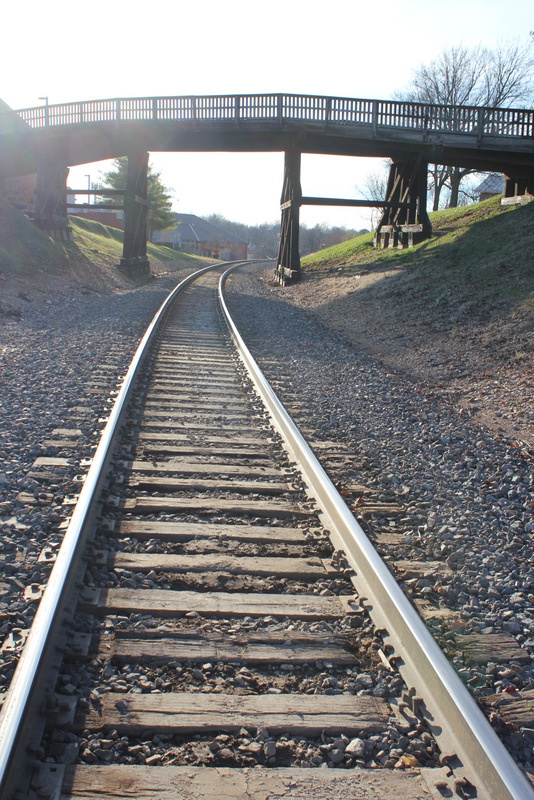 Beyond the vanishing point over the horizon, the wind blew a faint train whistle up the tracks. The train was saying hello to the Houston House–the best place for fried chicken when I was a kid. As the engine rolled past tiny Newburg, tucked in a deep Ozark valley five miles away, the train began a half-hour chug up a long steep grade to catch me.

Walking the tracks is an art easily mastered by an eight-year-old. Confident, I mounted a rail and tightroped for a mile toward the oncoming train, still only a sound fading in and out with the wind. I knew I had time, even as the faint rumbling grew louder. As it chugged up Newburg hill, deer and dogs and even a fast kid could outrun it.

I turned my back to the sound, and walked between the tracks toward home, a mile away on the edge of a blue-collar neighborhood called the shoe factory district. Moving faster, I stepped on every other tie and then every third tie as the train crested the hill, still out of sight around a curve, barreling toward my back.

The engineer leaned on his hornwhistle nonstop as he approached busy Rolla traffic, where battalions of impatient drivers shrank from the last-second temptation to ignore flashing lights and crossbars and jump across intersections.

The train roared round the Rolla curve and showed itself. I turned to face the beast. Crushing its railbed, the engine thundered toward me, hissing, headlight rolling and flashing. I stood in its path until I felt the wind shoved from its giant face, and its hornwhistle tore at my eardrums. Then I jumped from the tracks, slid down the railbed and rolled to a sit, to watch the train hurtle past, full of sound and fury.

The engineer shook his head as he passed. Then he waved. He always waved. He knew I respected him, unlike the cars that would try to beat him at those intersections ahead.

I waved back. He doesn’t know that once, as his train inched up Newburg Hill, I crawled between a moving boxcar’s wheels to reach the other side.

4 Comments on “Chicken with a Freight Train”