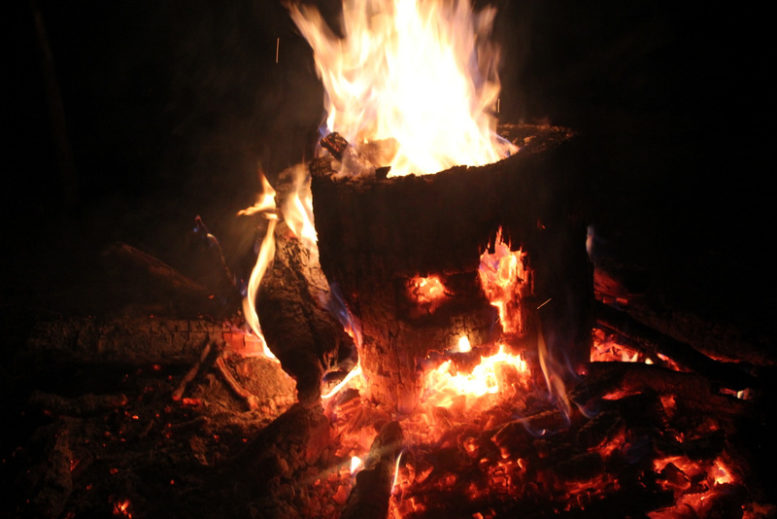 Downriver, I found a suitable gravel bar where I beached my canoe to climb the riverbank and set up camp deep in the Irish Wilderness. Because the wilderness deserves a “leave no trace” campsite, I packed light: a tent, sleeping bag, water, and a small amount of food. Oh, and whiskey. This is, after all, the Irish Wilderness.

I sat alone by the campfire and thought about the strange  evolution of this area: wilderness, then settled and clear cut and stripped, then abandoned and back to wilderness. A few tiny hamlets remain. One is a two-building town named Wilderness. It’s a half-day hike on the Ozark Trail from Wilderness to Handy, Missouri, where the nation’s smallest post office (6’x 9’) kept in touch with civilization until it disappeared.

The wilderness itself is named for the Irish families who busted their backs building railroads westward. Tough work. After they finished the job, Father John Hogan led the spent workers to decompress in the wilderness. But the people vanished sometime during the chaos of the Civil War, unable to fend off raids by confederates, Union troops, and bushwhackers. Now, the land is wilderness again, with hardly a human trace. During the past century a new growth forest has reestablished. It’s a bit weaker genetically than the old forest, but more trees cover the same territory.

As darkness fell and a full moon rose, I remembered the last time I camped in this forest, deep in this wilderness. It was a December night, and my campfire bolstered me against the cold, but also against the coyotes that circled at a distance, in a pack whose chorus sounded like a hundred dogs. In reality, the pack probably numbered a half dozen. Their night howls came first from the south, an hour later from the east. As the full moon reached its midnight zenith, they howled from the north. I couldn’t help feeling like a can of Alpo, opened and heated.

But I was prepared, with my most important defensive weapon: a good campfire.