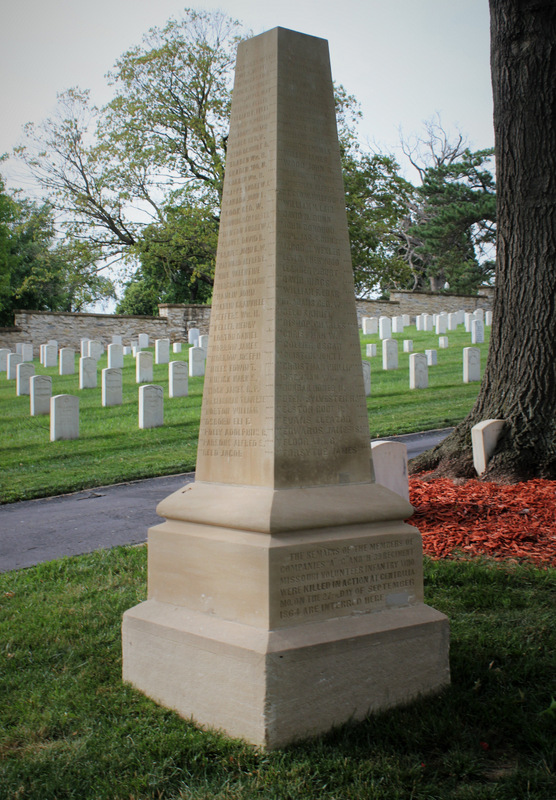 This monument stands atop a mass grave in the Jefferson City National Cemetery. Beneath are buried the 147 Civil War Union soldiers killed responding to the Centralia Massacre. 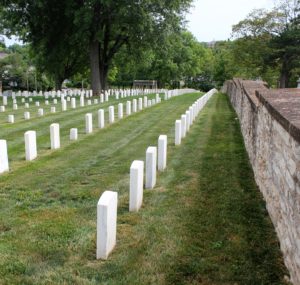 A train carrying furloughed Union soldiers rolled up to a blockade at the rail station. Anderson’s men boarded the train and robbed civilians of their watches and jewelry, then forced the unarmed soldiers and passengers off the train. They made the engineer set the train’s throttle at full speed, sending the empty train hurtling down the tracks to crash a few miles out of town. The marauders ordered the soldiers to strip down, and twenty-four unarmed federals—on furlough after months of fighting—were executed in cold blood.

“Anderson was just warming up to the carnage.

“The highways leading out of Centralia quickly find rural farmland and forests, just as they did during the Civil War. In a field off Route Z, things are peaceful now, interrupted only by the occasional train whistle from the three modern railroads that intersect in town. But in the moments following the massacre, with black smoke pluming into the clear sky, Union Major Andrew Vern Emen Johnston, known to his troops as Ave, got wind of the massacre. Enraged, he led 155 mounted soldiers into town. On the outskirts, three bushwhackers thumbed their noses at Johnston and his men, enticing the Union cavalry to pursue them into a box ambush in a farm field. Firing from forest on three sides, Bloody Bill’s bushwhackers killed 123 federals, and according to accounts, Jesse James shot and killed their commander.”–from Souls Along the Road

After the slaughter townspeople recovered and buried seventy nine soldiers in one long trench near the railroad on the east side of the town. “The trench was later enclosed with a fence and a slab erected to the memory of the dead. On it was inscribed: ‘The remains of Companies A, G and H, Thirty-Ninth Regiment, Missouri Volunteer Infantry, who were killed in action at Centralia, Missouri on the 27th Day of September 1864, are interred here.’ Later the remains were transferred to Jefferson City and reinterred in one grave in the National Cemetery there.’– 1911 History of Adair County, Missouri, by E. M. Violette